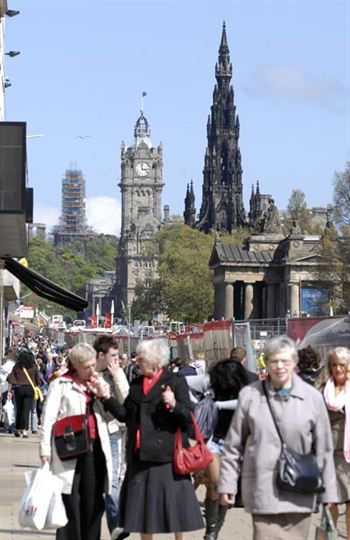 Scots retailers are enjoying a boost in sales thanks to this becoming the first ever Twitter-Christmas – with brands and bargains being pushed onto shoppers via the social networking success.

Scores of high-street brands familiar to Scots shoppers have embraced the social networking site, using it to do everything from promoting offers, to simply extending wishes of holiday cheer.

And with retail experts predicting a healthier climate for Christmas sales this year, the rise of Twitter could prove lucrative.

Richard Dodd, spokesperson for the Scottish Retail Consortium, said: “It’s a tremendously competitive Christmas this year and there is a sense that customers are more willing to spend this year than in previous years.

“There is a real retail battle to have what spending there is.

“A big part of that is talking to customers and telling them about the deals and offers, and every retailer is keen to make sure that they use them instead of their rivals.

“We have seen the development of a whole raft of ways for retailers to communicate with customers, and Twitter certainly falls into that category.

“Retailers are using all the facilities available to make sure that shops use them instead of their rivals.”

Brands such as TopShop, Debenhams and Carphone Warehouse have all embraced Twitter, with followers able to access deals through the site.

Many tweeting shoppers receive personalised replies to their queries, with shops thanking them for kind comments and even offering fashion hints and tips for the festive season.

Fashion giants H&M have more than 25,000 followers, and regularly update them with news of deals – and even suggestions for H&M tattoos.

Laura Maggs, PR Manager for H&M, said: “Being an international fashion retailer with over 1,900 stores in 35 different markets, H&M is present on both Twitter and Facebook, and it is a great way for us to interact with new and existing customers throughout the world.

“We let our customers know what is happening at H&M, such as forthcoming store openings and offers, upcoming collections and designer collaboration launches and fashion news and tips.

“Most importantly, our customers also have the opportunity to give us feedback and ask us questions via these forums.

“Twitter and Facebook are the biggest and fastest-growing social networks in the world and are great ways for us to reach our customers and fans – whether they are in Elgin or Edinburgh!”

“It can be a good way to promote time-related discounts and offers as it is an immediate way of getting a message across.

“Larger businesses are using Twitter to have conversations with their clients and improve customer relations.

“Smaller companies can make use of this conversational element too, but it does rely on having the resources to keep up a sustained campaign.”

“Instant communication with our customers as they do their shopping is a tremendous asset.

“Debenhams customers look out for a mix of news and offers through our Twitter feed.

We hosted our Twitter Assistants experiment in London in September, where we opened up our staff to the Twitterverse by providing them with BlackBerrys, which enabled customers’ requests to be answered in real time from the shop floor.

“We have a strong Twitter following from our Scots shoppers and intend to roll out the initiative in Scotland in the New Year.”