FLYGLOBESPAN: collapse of firm means heartache for thousands of holidaymakers and travellers

STUNNED travellers turned up at Edinburgh Airport unaware about the collapse of Flyglobespan – only to learn their plans had been left in ruins.

Some had travelled from as far afield as Aberdeen and Dundee to learn the news, others were en-route for family Christmas reunions abroad.

Amid the tears and anger, Flyglobespan staff themselves out of a job, were no-where to be seen, their vacant bookings desk commandeered by stand in airport staff offering only the best advice they could muster. 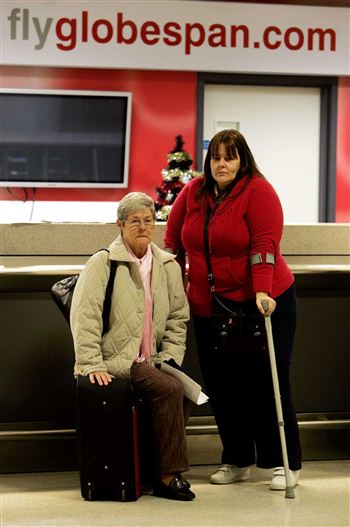 A Flyglobespan plane which had arrived from Egypt the night before – possibly the last ever in the history of the company – remained parked on the tarmac, abandoned in the snow just like the passengers left stranded in the departure lounge.

And on the information boards where details of flights leaving at 9am to Faro and 11am to Alicante, nothing, no details, not even a cancellation notice.

They no longer existed, leaving passengers in shock.

Caroline Spence, 64, lives in Spain with her partner Ian, 64, but had been home for eight weeks caring for her daughter Claire in Aberdeen.

The 35-year-old had recently undergone major spinal surgery following an accident, and was being looked after 24/7 by her mum until she returned back to Alicante for Christmas, her flight supposed to leave yesterday.

They travelled down from Aberdeen yesterday morning, Claire still on crutches, only to learn of the problems when they arrived.

Caroline said: “I’ve got to get back for Christmas. Ian is in Spain. My partner will be alone for Christmas if I don’t get home.

“We only found out this morning when we arrived in the airport.

“We heard nothing on the radio.”

“We checked the flight yesterday on the website and we had no idea that there was speculation about the company going bust.

“We’d been so consumed with looking after my daughter and we just came down here and didn’t think about it.

“We had been going to go with Ryanair but we had all the Christmas presents to take back so it was cheaper to go with Globespan.

“We spoke to people at the Globespan desk and they said it wasn’t their fault.

“They were just the messenger and said that they couldn’t have contacted us because there were 50,000 others in the same situation.

“We will just have to go back home.”

Another retired couple Gino Giannico, 75, and wife June, 77, from Dundee, paid £1600 for a package holiday to Alicante.

They were at a party the night before so didn’t find out the news about Flyglobespan until they reached the airport.

And they fear they may have lost all their money.

“We’ve been looking forward to this for months and months and now we’re going back to an empty house.”

Film maker Noe Mendelles, 50, originally from Paris but now living in Morningside in Edinburgh, had been on her way to a family reunion in Faro in Portugal where 15 of her relatives are waiting on her.

She turned up at Edinburgh Airport at 7am to book in for her 9am, only to have her plans shattered.

She said: “I booked my flights about three months ago – I am absolutely outraged.

“I was getting emails every week asking me to double check my booking and yesterday I checked it again and there was nothing on the website to warn anything was wrong.

“I just think there is no respect whatsoever for customers.

“I will miss seeing my niece because she will leave Faro today.

“I’m so angry at them – after all we try and organise our lives and pay for flights, it’s not cheap, it’s not like a present from Globespan.

“The staff said as much as they could, but they didn’t even have a manned desk.

“I’ve flown with Globespan about 10 times and although they are not the most reliable you got there eventually.

“They shouldn’t let customers come to the airport to find out what’s going on.

“When a business knows it is going bust surely you should give your customers some warning.

“It shows we just mean nothing to them.”

“My plans are ruined and this has really spoiled Christmas.”

Edinburgh taxi driver Stuart Fraser, 47, who was at the airport with his cab dropping off luckier travellers, said his own plans for a summer holiday looked like being left in tatters.

He said: “I was told by another taxi driver last night and saw it on the TV and all over the news.

“I got onto my credit card company, but they couldn’t say much about it.

“I paid over £1000 for our holiday to Alicante and I’ve heard it can take about a year to get refunded, so that doesn’t help me.

“Our summer holiday will be ruined if we don’t get the money back.

“I haven’t told my kids about it yet as I don’t want to spoil it for them, but they will have seen it all over the TV.

“It’s the first time I’d booked with them as I’ve always gone through a travel agent before.