FLYGLOBESPAN: day of tears for staff who learn they have lost jobs

JUST a day earlier they had been talking excitedly about their plans for Christmas, looking forward to time off for the festive season, helping customers with their own holiday plans.

But today it was so very different as many of the 100 or so staff who turned up at the Edinburgh HQ of Flyglobespan were left in floods of tears after learning that they had lost their job.

Colleagues hugged each other, visibly upset, stunned by the news after a series of meetings with the administrators from PricewaterhouseCoopers. 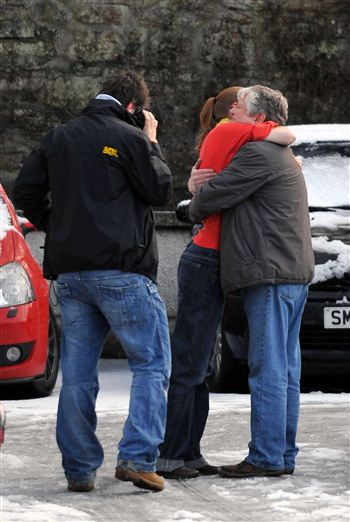 The mood during the 45 minute meeting was said to be “grim” ending with many leaving the five-story office block in Colinton shortly afterwards, carrying their personal items from their desks in boxes.

Those handful apparently spared, at least for now, refused to talk to anyone other than themselves, chain smoking outside the main entrance, while friends stumbled out into the car park towards home.

Graham Bernardi, 32, who was a costing department supervisor said the staff had been “devastated”.

He said: “I’ve worked here for three and a half years and this is really bad news, especially just before Christmas.

“We had heard rumours about stuff that was going on for a few weeks now.

“But it wasn’t until yesterday at night that we first knew for sure. I came in this morning just for the meeting and they just said we’ve all been made redundant apart from a few, but I don’t know how long they will be kept in for. It probably won’t be for long.

“It’s quite difficult to find a job just now but I’ll just have to see what happens.”

Chief Executive Rick Green was said to have spoken with staff at the meeting and apologised to them, but he managed to avoid the waiting press.

One disappointed ex worker said: “There were a lot of upset people in there this morning.

“Some of us have been here up to 10 years, before it was an airline too, so Globespan was our life.

“I arrived for nightshift on the phones last night and got told to go home at 10pm.

“It was grim this morning but we knew what was coming. 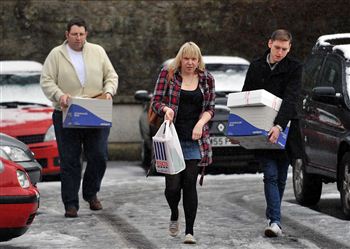 “The CEO was surprisingly apologetic and said we’ll get some sort of redundancy pay within eight to 10 weeks.

“It’s better than nothing.”

Bruce Cartwright, a partner with administrator PWC, said only a skeleton staff would be kept on through Christmas.

The priorities, he said were getting holidaymakers back home and helping staff find new work.

He said: “Today’s meeting with staff was to tell them what administration means for the company and their employment.

“The company has ceased flying and we are going through a period now of orderly wind down.

“We are also trying to make sure we get passengers back from overseas and look after people properly.

“Sadly a number of employees will be made redundant this morning and over the next few days.

“The vast majority will not be required for the orderly wind down and will be redundant before Christmas day.

“Sadly unless we can rescue bits of it we will have to wind down the entire company.

“The news was a genuine shock and came quite quickly for most off the workforce.”

By evening the HQ was all but abandoned, only the plastic model aeroplane bearing the once proud Flyglobespan livery still propped up defiantly in the reception area to mark a once proud travel company.

Amnesty International condemned for failing to take down “genocidal government”

Search for new council chief to begin on Thursday

Council boss facing a pay “haircut” – or is that a fringe trim?