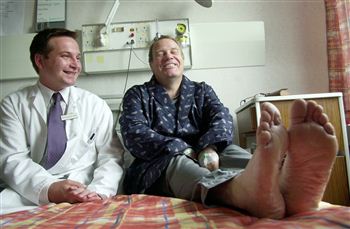 THE number of NHS staff earning wages totalling £100,000 or more is costing the Scottish taxpayer a staggering £230 million a year.

Now Health Secretary Nicola Sturgeon has been accused of getting her priorities wrong and challenged to curb big bucks pay deals.

Scottish Labour Party health spokeswoman Jackie Baillie said: “These figures should give us pause for thought.

“As the Director of Public Health at NHS Greater Glasgow and Clyde has pointed out, we need action to tackle the unacceptable gap in health outcomes between rich and poor in Scotland.

“This week we learned that more money is being spent on a bonus scheme for high earning hospital consultants than tackling hospital superbugs like C. Difficile and MRSA.

“The Health Secretary Nicola Sturgeon is getting her priorities badly wrong.

“She needs to have a hard think about what is really important and start putting patients first.”

The figures, released under Freedom of Information, showed that most of the staff collecting £100,000-plus salaries have medical roles.

But more than 40 “Executive Board Members” on Scotland’s health authorities also took home more than £4 million between them.

Some 830 of the 44,000 staff working for Scotland’s largest health authority took home more than £100 million between them.

All but five work in a clinical capacity.

Shetland, one of the UK’s smallest health authorities, had just one member of staff collecting a £100,000 cheque for last year’s work.

While highly-paid workers at NHS Borders, Fife and Ayrshire and Arran each took home a total of roughly £15 million per authority.

Health secretary Nicola Sturgeon said the Government was already leading from the front to have others look at their wage structures, but she insisted NHS Scotland had the budget to cope.

She said: “The reality is that the NHS budget is rising next year in real terms to a record £11.347 billion – even as Scotland’s overall budget is falling in real terms because of Westminster cuts.

“As a government, we have prioritised and protected health in our draft budget for 2010/11, in the toughest financial circumstances since devolution, precisely because of the top priority we attach to Scotland’s NHS.

“On public sector pay, Scottish Ministers have already set an example by taking a pay freeze, which will also apply to senior civil servants, and the Cabinet has agreed to extend that approach to higher paid people across the public sector that comes under our remit.