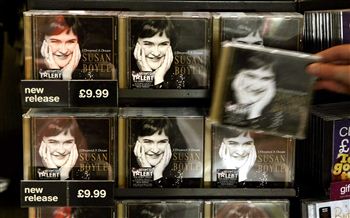 SHE may be a little shaken if not a tad stirred but Susan Boyle has been tipped to lend her lungs to the next James Bond theme tune.

The global songstress is rumoured to join the small group of stars who have been chosen to sing on 007 soundtracks.

And composers who have had hits with 007 songs in the past have even voiced their support.

Grammy-award-winning composer David Arnold – who was nominated for a Bafta for the song You Know My Name which was featured in Casino Royale – confessed his admiration for the Blackburn-born singer through Twitter.

He said: “Simon Cowell is like Father Christmas, this year he gave us the gift of Susan Boyle…and we didn’t even have to ask.”

The 48-year-old will follow legends including Sir Paul McCartney, Tom Jones and Dame Shirley Bassey who have previously been selected for the coveted-honour.

Their well-known numbers – Live and Let Die, Thunderball and Goldfinger – were hits for the singers across the world.

Monty Norman – who composed both the classic Bond theme music and the Dr No soundtrack – said he thought Susan was “great”.

He said: “They’ll think seriously about it because she’s got the right kind of sweeping voice.

“I think Susan Boyle is great and has done marvellously well.”

Boyle has celebrated world-wide success since her appearance on Britian’s Got Talent – her album is the best–selling debut in UK chart history and has sold more than 5 million copies.

He said: “From the standpoint of pure talent, Susan Boyle is a throwback to those great days when the likes of Shirley Bassey would be asked to sing the title song of a James Bond film.

“I think bringing in Susan Boyle would be a great idea, not only commercially but artistically, as it would ensure the series reverts to the kind of songs we regard as Bond classics.”