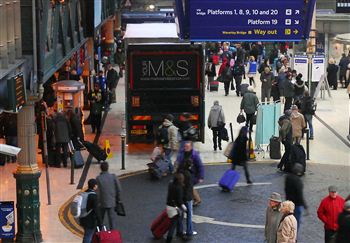 A MAN has died after slipping and falling at Edinburgh Waverley train station yesterday morning.

The 47-year-old was carrying a young girl – thought to be two or three years old – when he fell behind a Marks and Spencer truck on the main concourse at the station.

Witnesses said that he hit his head on the floor when he fell – leaving him with serious head injuries.

Passer-bys tried to resuscitate him before the ambulance arrived and rushed him to Edinburgh Royal Infirmary where he later died.

The manager at Upper Crust sandwich shop said that his friend had been helping unload the delivery truck when the tragedy happened.

He said: “My friend who works in Marks and Spencer told me that they were unloading the lorry when it happened.

“This guy was walking along holding his daughter up to his chest. She was about two years old at the most.

“He slipped and tried to regain his balance and then he fell backwards and landed on his back. He hit the back of his head on the ground.”

And he told how he had watched as kind-hearted passer-bys had tried their best to save the man.

He added: “I saw the man lying on his back when someone in plain clothes rushed over to help him. He took his tops off and tried to resuscitate him for maybe 20 minutes.

“A lady grabbed the daughter and brought her in to our shop then two ambulances arrived and that’s all I saw.

“I don’t know if the woman knew the girl but the girl wasn’t crying or anything. The little girl was wearing a red jacket maybe with a hood, I’m not sure. She had curly blonde hair.

“The man was lying on his back barechested while people tried to help him.”

Blood on the floor

The manager at Marks and Spencer said that there had been blood on the floor where the men fell.

“An off-duty doctor, I think he was an anaesthetist, ran over to help him and put him in the recovery position.

“The man was heard coughing afterwards and then the ambulance arrived.”

With seven centimetres of snow falling overnight in Edinburgh, the floor in the station was wet as passengers brought it in with them from outside.

Staff at other shops said that the floor had been slippery and warning messages were displayed on the information boards around Waverley.

A worker at Lastminute.com said: “I’m not surprised he slipped – the concourse and platform were very slippery.”

And a member of staff at the left luggage said that he had seen passengers fall before when the weather was bad.

He said: “These floors are terrible when it’s wet – I’ve seen a few people fall over before. It can get quite dangerous.”

The British Transport Police responded to the incident and said that it wasn’t suspicious.

A spokesman said: “Around 09.20 hours on Wednesday 23 December 2009, a man in his 40s appeared to fall as he walked on the concourse of Edinburgh Waverley station.

“He was taken by ambulance to Edinburgh Royal Infirmary, where he later died. His relatives are aware.

“Enquiries are ongoing into the circumstances surrounding his death although at this stage there do not appear to be any suspicious circumstances.

“A full report will be submitted to the local Procurator Fiscal by Lothian and Borders Police.”

A Network Rail spokesman added: “We can confirm that a man has died following a tragic incident at Waverley station this morning.

“We are cooperating fully with the police investigation into this matter.”