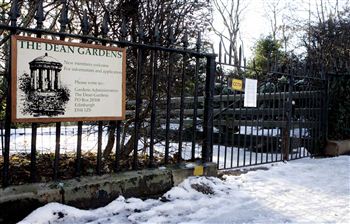 A PRIVATE pleasure garden for the rich has been hijacked by yobs holding their own “lock-in” drinking sessions.

Keys to the tranquil gated Dean Garden at Edinburgh’s West End costs £110 per-year each – enjoyed as a private playground for almost 150 years.

But police have raised fears that some sets of the expensive keys have fallen into the wrong hands.

They are “stepping up patrols” after locals complained of under-age drinkers setting up boozing dens at weekends.

It is feared parents in the leafy surrounding streets may have given their keys to their children, who then may have passed them onto friends.

Parties, dogs, cycling and ball games are all banned by the 14-acre garden’s own Trust committee, run by green-fingered locals who are fiercely against any building development in the area.

The exclusive garden is a favourite of residents in Edinburgh’s most expensive road – Ann Street – which was said to be a favourite de-tour of the late Queen Mother when she was being driven to Holyrood Palace.

But John Tod, the area’s community cop, said key-holders were to blame for the alcohol problem.

He said: “Dean Gardens continues to be used as a drinking den for youths at weekends and we are stepping up patrols in the area.

“I would like to take this opportunity to urge key-holders of the gardens to refrain from passing their keys onto friends or young family members, as this is a source of the issue police and the Gardens Trust are facing.”

Membership for the Dean Gardens recently rose from £80 to £110, with the extra money going towards private gardeners and landscapers.

The lush lawns boast a Victorian pavilion and a private path to the nearby Dean Gallery, which currently hosts artwork by Damien Hirst.