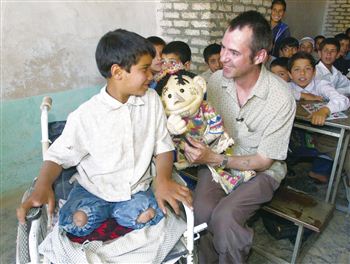 BOB the Builder star Neil Morrissey has revealed details of his dangerous charity work in Helmand Province, Afghanistan – with PUPPETS.

The famous Brit actor, while working as patron of the charity No Strings, risked life and limb to teach important life lessons to deprived children in one of the world’s most dangerous regions.

Teaming up with the creators of The Muppets and Sesame Street, the Men Behaving Badly star visited refugee camps, field hospitals and land-mine zones in 2003, using child-friendly puppets to educate locals.

47-year-old Neil said: “The impact of the puppets crossed with the power of the storytelling just has a devastating effect on anyone who witnesses it.

“I was involved in the early stages of the project, when we used to go out to Kabul and the Helmand Province in Afghanistan.

“So we’d go into these places where people were despondent because the terrible housing conditions, lack of healthcare, and we’d pull out puppets in the middle of all these people.

“So we asked charity workers who spoke the local language to put the puppet on his hand and tell the children about landmine awareness – and the reaction was unbelievable.

“It works so much better, and the children learned the information almost straight away.”

Using the theory that puppets can communicate with children of all cultures where sometimes adults cannot, No Strings was founded in 2003 by international aid worker Johnie McGlade, with the mission of delivering life-saving messages to children in the developing world.

The charity has an ongoing landmine-awareness programme in Afghanistan, and along with a peace-building programme for South East Asia, the charity also works in sub-Saharan Africa, where it has created a series of HIV-related films to support the work of local organisations.

Since becoming a patron, Neil has witnessed the effect of the puppets first-hand in Afghanistan, as well as in war-torn Southern Sudan.

He said: “I’m not kidding with the numbers when I say maybe a thousand children would gather round to look at these puppets.

“We went to Southern Sudan and visited field hospitals and similar things, and whenever the puppets would come out, they would have this huge effect.

“The genius of using puppetry is that, especially in a culture-ripped country, as soon as you use it, it gets attention.

“It’s also a medium by which you can get a message across – it’s so simple and brilliant.”

Johnie McGlade, founder of No Strings said: “It’s great to have well-known names like Neil on board because they can help raise awareness of the good work that No Strings does.

“No Strings provides life-saving messages to children in disaster or conflict stricken situations around the world in an entertaining way, and Neil Morrissey is a born entertainer.

“Our goal is to help important survival messages reach the largest possible audiences – and having people like Neil and Hugo Speer on board helps us keep people in the UK aware of the work we do, so their commitment is crucial.”

Neil added: “They’re doing amazing work in the field, but people aren’t that aware of what they’re doing.

“So it’s important to maintain awareness through other means, and if I’ve got the profile to help with this, then that’s exactly what I’ll do.”