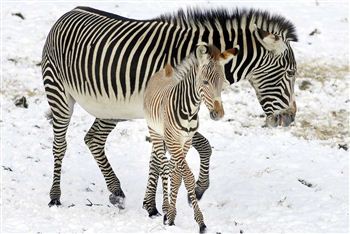 Cunning staff at the zoo used crafty techniques to encourage the animals to breed more – including installing mirrors in some enclosures.

As a result, this year has seen the arrival of zebra foals, flamingo chicks and a clutch of baby monkeys – a total of 250 new animals.

A spokeswoman for the zoo said that the animals had kept on breeding right through the year.

She said: “We normally have a baby boom in spring and summer but the babies have kept on arriving right up to the end of the year.

“We’ve had a couple of really exciting late arrivals such as the king penguin chick and the zebra foals.

“Baby animals are always really popular with visitors but it is important to remember that they play a vital role in worldwide breeding programmes.

“These breeding programmes aim to create and maintain a viable population in a zoo community, which acts as a safety net against extinction.”

Other arrivals include two reindeer foals, three maned wolves and a pygmy hippo.

To help the zoo’s flamingos breed, devious staff installed mirrors into their enclosure – making the brightly-coloured birds seem in a larger group than they actually were.

Sue Gaffing, keeper of hoofstock at the zoo, said: “They’re settling in very well. Our female Lois was born on 17 October and Allingham came on 11 November.

“His name might seem a little unusual, but because he was born on Remembrance Day we decided to name him after soldier Henry Allingham, who was one of the final surviving soldiers of the First World War.

“Both zebras are doing great, they’re very curious, and we’re pleased to have a new stallion. This is the largest collection of zebras we’ve had in years.”

The zoo’s keeper of monkeys and koalas, Donald Gow, welcomed the surge of monkey babies – and in particular three new baby baboons.

He said: “This year has gone really well – we’ve had one in September, October and November.

“The last one is tiny and is clinging to its mother but it’s very curious.

“We’ve had some new drill monkeys come over from America and it’d be nice to see some of their babies in the New Year.

“We’re hopeful that we’ll have some little ones in April time, as there’s been a bit of romancing already.”