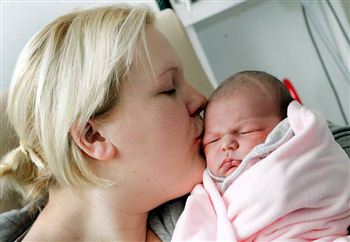 THE DELIGHTED mum of the Lothians’ first baby of 2010 has spoken of her Hogmanay birth miracle.

And she revealed that she went into labour just as the Hogmanay celebrations were getting underway.

Lyndsay, 21, said: “I actually went to hospital earlier in the day – around 3pm – but they sent me home to wait a bit longer.

“They said that she wasn’t quite round the right way, and that I should wait at home while the contractions carried on.

“So I went home and tried to stay up for the midnight bells, but I was really tired so I fell asleep.

“I woke up with my final contractions just as the countdown was starting on TV.

“By the time the fireworks started my contractions were really fast and powerful, so I called my husband’s aunt and she drove me to the hospital for about 3am, and I gave birth an hour later.”

And the festive period looks set to be a busy time for the Boyd family as Mya’s four-year-old sister, Jodie, celebrates her birthday on Christmas Eve.

Lyndsay and husband William, who works in a Broxburn abattoir, also have another daughter – one-year-old Brooke.

Lyndsay said: “With her sister being born on Christmas Eve, the festive period’s going to end up quite expensive, especially when they’re teenagers!

“She was actually due on the 29th, and seeing as she’s my third I genuinely didn’t think she’d arrive any later than that.

“She was quite crabby at first, but she’s been brilliant since, absolutely gorgeous and feeding all the time.

“And she’s very healthy too – she’s definitely had more sleep than I have!”

She added: “It’s a brilliant feeling bringing a new generation into the family.”

Dad William, 24, was at home looking after the couple’s younger two children – but Lyndsay admitted that the anxious father had been in touch constantly.

She said: “He’s been ringing every half an hour while looking after Mya’s older sisters – he can’t wait to see her.”

Little Mya made her way into the world at 8lbs and 7ozs.