Hordes of hardy fundraisers braved the icy waters of the River Forth on Mew Year’s Day as thousands gathered in South Queensferry to watch the annual Loony Dook. 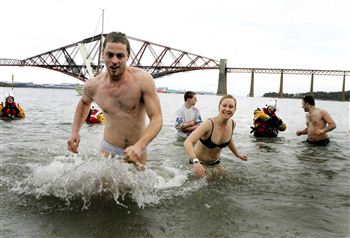 Many revellers were chilling out after celebrating Hogmanay in Edinburgh the night before, but created a fantastic atmosphere despite their sore heads.

Hundreds gathered in an assortment of fancy dress, bikinis and underwear despite temperatures dropping as low as minus one Celsius for the 24th year of the Dook.

Coastguards patrolled the waters as the demented dippers took the plunge into bone-chilling water at midday.

David Riley, right, came from Sydney, Australia for Scotland’s Hogmanay celebrations and faced the elements in just a pair of pants.

He said: “I’m just crazy I think, I got here the day before yesterday and enjoyed the party in Edinburgh last night, it was great fun.

“The water was not as bad as I thought it was going to be, I’m colder now that I’m out of it but there is no way I am going back in.”

The event raises money for several different charities, with this year’s main beneficiary being Queensferry Churches Care in the Community which has already received over £1,000 from the freezing dip.

Other donations were made to Marie Curie Cancer Care charity and to the British Red Cross while a group from Edinburgh’s Capital Fitness Dooked in memory of fallen firefighter Ewan Williamson.

One woman sporting a Team Ewan t-shirt said: “Ewan was a member of our gym so we thought it would be a good idea to this for him.

“The water was very cold but it’s for a good cause.”

Girls from around Falkirk donned army gear as they raised money for Help for Heroes.

Lisa said: “We went right under the water, it was bloody freezing!”

Douglas Roberts, 27, from Tranent, dooked to prove he was no coward – he dressed as a giant CHICKEN before taking to the water.

He said: “It was alright, it was hotter than I thought – I might go back in.”

“My friends said I was chicken and I would never do it, so I thought the costume was ideal.”

Organiser David Steel said the event had been a great success and added that it had attracted the largest crowd ever, both in and out the water.

David said: “It was a fantastic day, hopefully everyone enjoyed themselves and a lot of money has been raised for charity.

“That’s the biggest crowd we have had in the water, I have not checked how many were registered in total but it must have been at least 600.

“We had a little bit of bother with the sheer number of people but it was a good natured crowd.”

Boxing Day “Dip in the Sea” turnout a disappointment for organisers