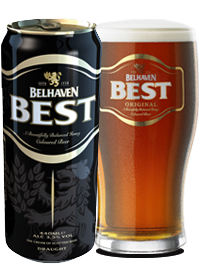 SCOTLAND faces running out of beer after breweries struggled to get supplies to pubs, shops and supermarkets.

Locals formed a human chain in sub-zero temperatures to rescue 150 kegs of beer from a lorry after it slid off a road in Dumfriesshire as blizzard conditions struck.

Delivery drivers in Aberdeen were forced to turn back after brewery bosses decided it was too dangerous to go on.

And in the Borders one brewery had become completely snowbound with just two brewery staff able to reach work.

They said that the crisis would not just affect pubs, but most of the major supermarkets that they supply across Scotland.

Gary Clelland, depot manager at Belhaven’s Dumfries brewery, said that an 18 tonne truck – carrying 13,000 pints of beer – slid off the road because of the “horrendous” conditions on the roads.

Slid into a ditch

He said: “It’s was up near Moniaive in Dumfriesshire, and there was a milk truck coming out of a farm.

“Our lorry pulled over to the side to let it pass and it actually slid off the road into a ditch.

“We’ve got a van at the warehouse and I sent down the staff to pull the beer out of the truck.

“The staff put some real hours in and now we’ve split the deliveries in half to make the lorries lighter.

“And we had to hire this firm to get the lorry out of the ditch, it was covered in dirt and snow.

“I’ve sent out the drivers telling them to be really careful and to take their time, not to rush, and if it’s too dangerous, not to carry on.

“The roads down here are just treacherous, it’s quite horrendous today.”

Richard Hepburn at Belhaven’s Aberdeen brewery said that conditions had caused him to take one lorry carrying around 13,000 pints-worth of beer off the road “because the conditions were so treacherous”.

He was actually covering for brewery boss Heather Lovie, who had broken her ankle after slipping on ice and is still being treated in hospital as the toll of troubles mounted up.

A spokesman for JD Wetherspoon – who have 750 pubs across the UK – said: “We have a number of pubs across Scotland.

“We’ll have a better idea by tonight if the trucks have got through or not.”

A spokeswoman for Punch Taverns – who run 800 pubs – said: “We’ve certainly had problems.”

But it’s not just pubs that aren’t getting their deliveries.

Brewers across the nation have told how they haven’t been able to get their beer to major supermarket chains due to whiteout conditions.

Rhonda Howitt at Broughton Ales in Peeblesshire said that they were snowed in after five inches of snow fell in just a few hours.

She added that they were unable to supply any of the major supermarkets yesterday  after just two staff made it into work.

Rhonda had to phone Asda, Somerfield, Tesco, Morrisons and Co-op to tell them that they wouldn’t be able to deliver stocks of some of their best-selling ales, including Black Douglas and their special Robert Burns ale, Exciseman’s 80/-.

She said: “We can’t delivery anything today because all the staff are snowed in.

“We deliver to the supermarkets but it’s just the two of us here today and we can’t get the van out anyway.

“Tesco actually collect theirs but they can’t come today, they wouldn’t even get up the driveway.

“We’ve had five inches of snow just this morning.

“And we’re not producing anything today either as none of the staff are in.

“We’ll try and get through tomorrow – we’ll just have to.”

Anne Gibb at the Cairngorm Brewery in Aviemore said that they hadn’t been able to reach their clients in Aberdeen due to the dangerous roads, and were attempting to reach Glasgow today.

The firm supply Tradewinds, Black Gold and Sheep Shagger to Tesco, Waitrose and Sainsbury’s as well as many off-licences and pubs.

She said: “Today is the first day that we’ve not been able to deliver.

“We weren’t able to deliver to anywhere in Aberdeen, we supply loads of different places there.”

And Andrew Fraser, brewer at Black Isle near Inverness, said that only he had managed to get to work, with the rest of the staff all snowed in at home.

He said it was “just too dangerous” to attempt to deliver to the firm’s clients, including Tesco – who buy 3000 bottles per month – and Waitrose and Co-op.

He said: “It’s a complete whiteout today, there’s only me here, which is just as well because I’m the brewer.

“The supermarkets all have orders outstanding, we could try and get to Inverness, it’s only seven miles away, but it’s just not worth the risk – it’s just too dangerous.”

“We also supply a lot of pubs in Edinburgh. We might try and get to them at the end of the week but we’ve still got staff stuck down in Edinburgh after a wedding and everything.

Mike Lees, managing director of Tennent Caledonian – Scotland’s largest brewery – said that staff had pulled out all the stops to get supplies to pubs and supermarkets during the whiteout.

“The weather has been challenging but Tennent’s Lager deliveries are still on track and our team is working extremely hard to ensure our customers and consumers receive their orders, despite these difficult conditions.”

Scots author’s ‘The lost sessions’ due to hit bookshops