Snow chaos as criminals locked out of court 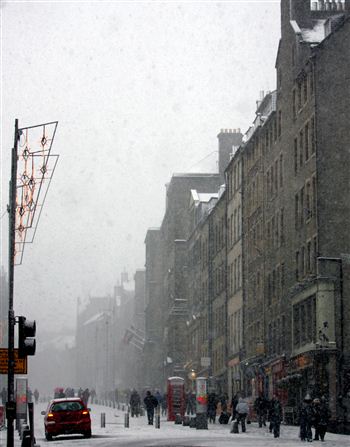 SCOTLAND’S legal system ground to a halt yesterday as heavy snow took its toll on the country’s court cases.

Three Sheriff Courts were shut completely yesterday (Wednesday), while those that were open had to postpone cases as dozens of cons and lawyers failed to appear.

Rather than getting locked up, criminals were locked OUT of Sheriff Courts in Jedburgh, Peebles and Duns in the Borders.

A snow dump of up to 20cm also forced the closure of every school in the Borders, East Lothian, Aberdeenshire and Shetland.

Edinburgh Sheriff Court was open yesterday, but only a handful of accused people made it in for their cases.

While the streets outside were filled with snow, the docks inside were mostly empty.

As a result cases were continued without plea, meaning those accused of crimes will have to return to court in three weeks.

Around 150 individuals were due to appear at the capital’s Sheriff Court, but criminal proceedings finished at an unusually early 2.30pm.

Despite many roads being impassable or closed to motorists, one Sheriff said he “didn’t see the problem.”

Told that one lawyer was housebound in Dalkeith, Midlothian, due to snow, Sheriff Graeme Warner said: “I have heard today of other people making it in to court from Dalkeith, so I don’t see the problem.”

But most other Sheriffs didn’t bat an eyelid when the awful weather was used as an excuse for non-appearances and allowed cases to be continued without plea.

A Scottish Courts Service spokesperson said: “As a result of Wednesday’s extreme weather, courts in Jedburgh, Peebles and Duns had to be closed.

“All cases due to call are continued to further dates.

“All other courts continued as normal across the rest of Scotland.”

The country’s deep freeze is set to continue for another two weeks, according to the Met Office, with further snow showers forecast.