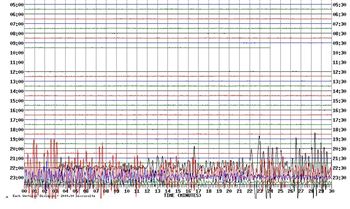 SCOTS geologists have warned that deadly aftershocks from the Haitian earthquake could blight the international community’s rescue efforts for weeks to come.

The aftershocks – some nearly as violent as the initial quake – are expected to lead to the collapse of already damaged buildings, endangering the lives of rescue workers and trapped victims.

International aid workers are still battling to save those trapped under the rubble after the massive magnitude 7.0 quake rocked the Haitian capital of Port-au-Prince.

Earthquake experts at the British Geological Survey in Edinburgh said that there have been more than 30 aftershocks since the main quake.

Dr Brian Baptie, Seismologist at the British Geological Survey said: “Earthquakes of this size always have aftershocks that can last for many weeks.

“These always punch above their weight, affecting buildings that have already been damaged and hampering relief efforts.”

Some of the smaller quakes since then have measured a significant magnitude 5.7 – nearly as devastating as the original incident.

Dr David Kerridge head of earth hazards at the institution, added that landslides could affect many areas in the days to come

He said: “With an earthquake of this size and the mountainous terrain there is a strong possibility of landslides, which may have caused many causalities in more remote parts of the island.

“Due to disruptions in communications the full extent of the disaster might not be clear for a few days.”

This comes as an international effort to rescue, feed and shelter the stricken survivors gets underway.

Teams from across the globe are being mobilised to travel to the disaster zone, which is situated just 10km from the Haiti’s capital.

Susan Boyle to give up sweets and chocolate for Lent