ACTOR Darren Day unleashed a foul-mouth rant at photographers on his way to court today (Wednesday).

The We Will Rock You star – who was described as “seething” – let rip in the street and was threatening to waiting snappers.

Day was scheduled to appear in court on drink drive charges before his case was continued until next week.

Italian born Lorenzo Dalberto, a photographer with one Edinburgh-based news agency, was among those on the receiving end of Day’s outburst and said he feared for his expensive camera gear.

He said: “He walked with his head down most of the way through the street.

“But he raised a finger as he walked past me and said “f***ing” something – he was seething and threatening, and said something about my cameras.

“He was abusive, which was not nice. I was only doing my job.”

On leaving court Day again tried to avoid photographers and a film crew by breaking into a run.

The panto star said he had “nothing to say” as he was quizzed by reporters, before getting into a taxi and putting his head in his hands.

He was seen making a call on his mobile as the taxi sped off. 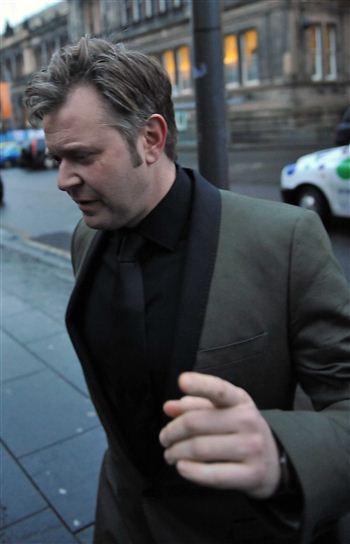 Day was back in court yesterday over claims he drunkenly smashed his Mercedes into a lamppost at 4am.

The 41 year-old spent a day in police cells last month after being arrested in Edinburgh where he was performing in the Queen-themed We Will Rock You musical.

He denied six charges against him – possession of a Kubotan weapon – and was due to go to trial next Thursday.

But his lawyer said yesterday that he was not prepared to go to trial and Day must return to court next week.

A far cry from his stubble-covered and bleary-eyed appearance from custody in December, Day arrived smartly suited and booted at Edinburgh Sheriff Court.

And rather than turning up in a Reliance custody van as before, Day strode into court confidently from a taxi which had picked him up from his temporary residence in Edinburgh.

His arrest on December 18 left theatre producers sweating over whether he would be released from custody in time for his starring role in the hit show, which ended on Saturday night.

Police seized Day’s Mercedes and it is being held by the Crown pending the outcome of the case.

Although the musical is over, Day is continuing to reside at the city’s Balfour Street, just a ten minute drive from Manor Place, where the crash is said to have happened.

It is claimed he had 58 microgrammes of alcohol in his breath – nearly double the drink-drive limit – when arrested.

“I am not prepared to go to trial as I am awaiting various information from various sources.”

Sheriff Catherine Mackie allowed the intermediate diet to be continued until next Wednesday – a day before the trial is due to begin.

Day’s agent continued to refuse the opportunity to comment on the case.

Day started his career as a clean-cut pin-up star but soon gained a reputation as a love rat after a string of glamorous girls fell under his spell.

His personal life made the most headlines and earned Day the dubious accolade of Britain’s number one love rat.

Just a year after he shot to fame, Day started dating Anna Friel, who was 18 at the time.

He proposed, but dumped her after three years, in 1997.

Two weeks later the star met Tracy Shaw of Coronation Street fame, who he was staring with in Summer Holiday in Manchester.

Again he proposed, using the same £30,000 engagement ring that he had given to Ms Friel.

But that relationship failed in 1998 and the singer was soon dating Home and Away’s Isla Fisher, who he again met on stage in Summer Holiday.

The serial lothario again proposed but the couple eventually split in the summer of 2000, saying it was due to their work commitments.

Day then embarked on flings with Tara Newley and Sophia Theirens before meeting 24-year-old dancer Adele Vellacott in January 2001 whilst staring in panto together.

During their 20-month relationship Day took part in the first series of I’m A Celebrity where he unashamedly flirted with Tara Palmer Tomkinson – who he accused of trying to ruin his relationship with Mr Vellacott.

Yet again Day proposed but just eight months after the engagement – in 2003 – Ms Vellacott found out he had cheated on her with Suzanne Shaw of HearSay.

He filed for bankruptcy in 2006 – leaving Ms Shaw with no choice but to sell the £800,000 house they had shared to keep bailiffs at bay.

In the same year he was dropped from the Channel Four show The Games after failing to turn up one day.

The star met actress Stephanie Dooley in 2006 whilst doing panto and the pair married in 2007.

Primal Scream frontman honoured after “making it” on Corrie