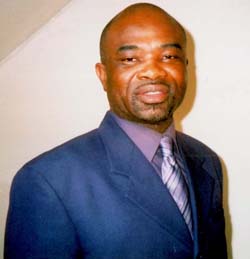 A CHURCH leader from Gordon Brown’s home town has taken out an advert in his local paper to support the under-pressure PM in the upcoming election.

Reverend Joe Nwokoye insists the Fife-born Premier is the best candidate for the job.

He describes Mr Brown as the only qualified person to lead the country and claims it would be a missed opportunity if David Cameron and the Tories came to power.

Dr Nwokoye said: “This was a wide spread message – it would be a great opportunity missed if he is not in power after the next General Election.

“It’s about someone I believe in.

“I think Gordon Brown is the best man for the job, and come the General Election, myself and my family will be voting for him.”

Rev Brown was a minister at St Brycedale in Kirkcaldy and brought up his children in the manse.

He also was a minister in Dunoon, Glasgow and Hamilton.

The Prime Minister has spoken of how his upbringing helped shape his politics and beliefs.

Dr Nwokoye – who preaches at the Zion Praise Centre – said: “Among the other candidates, who is more qualified than Mr Gordon Brown?

“He works very hard to unite the whole Kingdom, knowing that united will stand and divided will fall.

“He is working harder to initiate peace in the world and giving a voice to smaller poorer nations who do not have proper representations in the western world.”

The message comes a week after Mr Brown’s position was threatened by his own party.

Former ministers Patricia Hewitt and Geoff Hoon wrote to all Labour MPs asking them to support a secret ballot on Mr Brown’s leadership.

Dr Nwokoye – who has met Mr Brown on several occasions during the PM’s visits to his constituency town – branded his competitors under-experienced.

He said: “If you are travelling by air you would want to be assured that your pilot is an experienced one.

“David Cameron and Nick Clegg are not experienced enough to pilot Great Britain but Mr Brown is.

“The two other candidates are completely different who hadn’t tested hardship personally.”