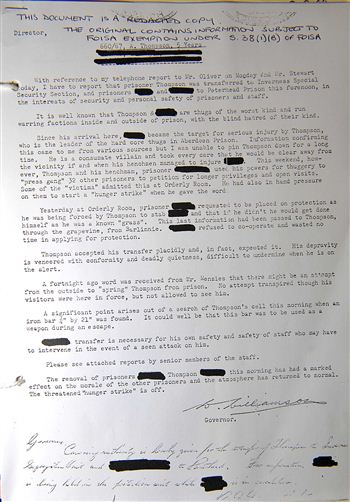 THOUSANDS of classified government documents have been released to the general public.

Many of the items, which include details of scandals, accidents and public events, were intended to be destroyed or locked away for up to 75 years.

But now secret files have been opened up to the public by the National Archives of Scotland in Edinburgh.

They include prison reports of Arthur “The Godfather” Thompson, one of Scotland’s most violent criminals.

Letters from the governor of HMP Aberdeen describe the Glasgow gangster as a “consummate criminal” while others show his wife, imprisoned herself, pleading with prison bosses not to move Thompson to Barlinnie in case he fell in with the wrong crowd.Another document on the aftermath of the Piper Alpha disaster – marked to be destroyed on the front cover – details the pollution of the area, with fears that tonnes of dangerous substances could affect fish stocks.

Others include the emergence of the HIV/Aids epidemic and how to deal with it in Scotland’s prisons, while another details the BSE outbreak.

One document even reveals details surrounding where to evacuate Scotland’s works of art in the event of a nuclear strike.

The files have been released under Freedom of Information legislation, allowing the public to discover stories that may have been kept secret within their lifetime.

New laws brought about in 2002 reduced the 30-year restriction to 15 years, bringing many classified documents into the public arena.

Wallace letter the real deal and may head home