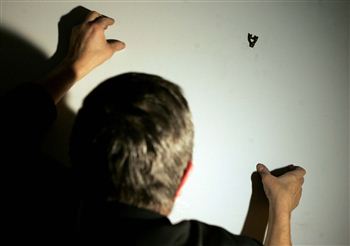 A VALUABLE painting has been pinched from one of Scotland’s top law libraries in a “mystery” heist.

Bosses at the Signet Library in Edinburgh believe a daring thief snatched the masterpiece after attending a talk as a GUEST on New Year’s Day.

Staff returned to work at the prestigious legal collection after their festive breaks to find ‘I Cannae Hear Ye’ by deceased Scots artist, Tom Scott, missing.

But the chief executive of the Society of Writers to Her Majesty’s Signet has extended an amnesty to the thief if they return the prized watercolour.

Robert Perrie said: “We’re very disappointed that our hospitality should be abused. It’s a private building but we open it up to the city as often as he can.“It’s a unique item, and one that we’d obviously like to see returned.

“I don’t know about the police, but if whoever took it would were to quietly return it I don’t think there would be a problem.”

Mr Perrie said the painting was last seen on Hogmanay when the library was closed before a debate on reformation was held the following day for around 200 people.

He said: “The building was locked up on the December 31 and the painting was there.

“It was opened up on January 5 and it was gone.

“There only time the building was used between then was for a debate held by Unique Events.

“It was a debate on John Knox and the Reformation, I believe, so it was quite a civilised affair.

“Most of the members of the public would have been people with a keen interest in the cultural and religious history of Scotland.

“The event was held between 2pm and 5pm, we think it must have happened then.

“It was open to members of the public who had bought tickets and it was pretty well policed, as we had two members of staff and the events team had two there as well.

Mr Perrie said the crafty crook must have sneaked the painting – which is two feet across and framed in an elaborate border – out without anyone noticing.

He said: “The painting was down in the basement by the toilets, but anyone going down there would have had to have had a ticket.

“Our staff didn’t see anyone leaving with it but in an event with some 200 people I suppose it could have been sneaked out in the crowd.”

The picture is thought to be worth up to £4000 following the death of the Scottish Borders artist in 1927.

Lothian and Borders Police are appealing for witnesses for what they described as an “opportunistic” theft.

A spokesman said: “This has been an opportunistic theft of a relatively expensive piece of artwork, and we are eager to ensure it is returned to the library.

“Anyone who has any information that can assist our inquiries should contact police immediately.”

A Unique Events spokesman said the firm would assist police with their enquiries.

The spokesman said: “Unique Events were contacted on the afternoon of Wednesday, January 13 by The Signet Library to inform us that a painting had gone missing from an area of the building over the Hogmanay period between December 31 and January 5.

“The Edinburgh’s Hogmanay ticketed event ‘A New Year’s Day Conversation’ was held in The Signet Library on Friday, January 1. Lothian and Borders Police are now holding enquiries to ascertain exactly when the painting went missing over the holidays and to ensure its immediate return.

“We are yet to be contacted by the police but will do everything we can to assist them with their enquiries.”