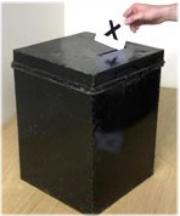 SCOTLAND’S highest paid council staff will share a £200,000 jackpot – for announcing the results of the General Election.

The extra cash will be added to their salaries as a one-off payment for their polling day duties.

And that will mean a bonus of about £10,000 for some of the chief executives of local authorities.

Glasgow City Council chief executive George Black – who earns £158,000 – will get almost £10,000 for declaring the results of seven constituencies.In Edinburgh the city council’s £155,000-a-year chief executive Tom Atchison is due to pick up £15,300 for the five constituency votes he declares.

The Ministry of Justice – who is responsible for running UK elections – said the payments are justified as the election duties are not part of a chief executive’s day-to-day responsibilities.

The payment is also to guarantee impartiality.

Tory MSP Bill Aitken said: “I have never understood why elections are not part of a chief executive’s duties.

“It is nonsense to suggest the necessary detachment is assured by the making of a payment.

“While I have never had doubts about the probity of counts, the argument about separation does not work.

“Economic times are hard and I think we ought to view the duties carried out on election day as part of the normal, run-of-the-mill job as a council chief executive.”

A Ministry of Justice spokesman said: “The post of returning officer is completely independent of any other employment and is remunerated separately.

“The level of payment reflects those important management responsibilities and the fact that they are answerable in law if they fail to meet them.

“If anything goes wrong, they are personally liable and can be taken to court.

“It entails a considerable amount of personal risk.”

£45,000 in expenses paid to tram consultancies