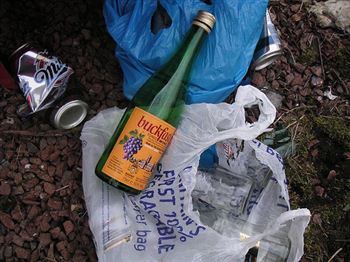 THE makers of Buckfast are under pressure to remove caffeine from its recipe after new figures linked the drink to crime.

Research shows that half of young men jailed for booze-related crimes consumed the tonic wine before committing an offence, with some claiming the caffeine made them “hyper” and aggressive.

A BBC investigation has revealed that the strong tonic wine has been cited 5,000 times in crime reports over three years by Scotland’s largest police force, Strathclyde.

One in 10 of the crimes were violent, with figures showing that bottles of Buckfast themselves have been used as a weapon on 114 occasions.

BBC Scotland Investigates, being shown tonight also examined the physical effects of drinking Buckfast through inmates at Polmont Young Offenders’ Institute.When asked what affect two bottles of Buckfast would have on an individual, the amount some inmates admitted drinking, Neuroscientist Dr Steven Alexander said: “It’s going to have him bouncing around all over the place because the anxiety levels, the adrenalin will be running around.

”He will certainly be feeling very anxious, very aggressive.”

The figures, obtained under Freedom of Information legislation, has prompted demands for a clampdown on caffeinated alcohol.

“This is not just anecdotal now, it’s not just what we hear from our constituents and see in the streets, bottles lying around – there is now evidence.

“We need to have new legislation which will reduce access to caffeinated alcohol products because the impact it’s having on communities is too great to ignore.”

Jim Wilson, the firm’s spokesman, hit back, saying: “Why should we? It’s been there for more than 80 years so why should we go about changing the recipe of something just to satisfy somebody’s whim?

“We’re supposed to live in a free society. If we go down the route of removing caffeine from the drink where would it end?

“We see Buckfast all over the world so why are the supposed problems associated with it not being replicated elsewhere.”

US watchdog, the Food and Drug Administration is currently investigating how safe caffeinated alcohol is, which could result in a total ban.

A spokeswoman for the Scottish Government said that a comprehensive approach on tackling alcohol misuse was needed.

She said: “That is why we have outlined a package of measures to help reduce consumption and to encourage more responsible drinking.

“Buckfast actually constitutes a tiny proportion of alcohol sales and consumption, only 0.5 per cent, and there is no evidence mixing alcohol and caffeine enhances the intoxifying effect of the alcohol.

“However, we are always prepared to listen to constructive and evidence-led ideas for tackling Scotland’s problem of alcohol misuse.”