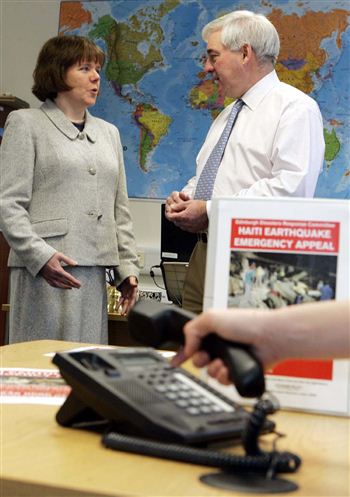 Mercy Corps, which is co-ordinating fundraising efforts from its European HQ in Edinburgh, said they had been inundated with offers of help since the quake struck last week.

And they said time was of the essence if they were to help as many survivors as possible.

“We respond to international disasters and our long term development is to get people into recovery to a better position.

“Their lives have been wrecked and they need to get back on their feet and we need to give them some dignity back – what we focus on is getting people back into a normal life.

“This is a very difficult situation – it’s an urban earthquake and there is a big child population there.”

He added:  “From a Mercy Corps point of view we have had a huge response – we have got a very experienced team there.

“Because it was in a city it makes it an exceptional crisis – there are facilities which are not there in Haiti.

“The UK has a very high reputation for responding to helping disasters – and giving cash is by far the best way to make a difference.”

Mercy Corps say they are pleased with the initial response which has already seen about £90,000 donated since the appeal was launched – with more pledged for the coming days.

John Cunningham, director of fundraising at Mercy Corps, said: “We have had great support from the press and radio and other organizations have also been involved.

“We’re quite pleased with the initial response which has raised about £90,000 over the past couple of days but we are waiting to hear from a lot of clients that we have contacted.

“A lot of donations have come in by mail and it’s still early days yet – the appeal is going to last over the next couple of weeks at least.

“The scale of this disaster is huge and Scots have been great with their donations as they normally are – there’s no question about it.

“Most of our responses have been coming from this area.”

Tuesday’s earthquake is feared to have killed as many as 200,000 people with tens of thousands more left injured, traumatised and homeless.

Basic services and communications have collapsed, hospitals are overwhelmed and survivors are vulnerable to disease, hunger and dehydration.

The Scottish Government has provided £250,000 – a figure matched by Scottish charities – and the European Union pledged 400 million euros in immediate and long term aid for Haiti.

Ann McKechin was herself once a member of the Mercy Corps, and spent three years on the Westminster International Development Select Committee.

She said: “Scots have been very generous in supporting the cause and we would encourage more to support the cause in Haiti.

“We are ensuring that there a number of charities such as Mercy Corps which are becoming internationally respected in terms of their work.

“Our government is giving money to organisations such as Mercy Corps who are the ones who are on the ground and who help to find these people.

“I think they are doing a great job and encouraging people to get involved with the cause.”

Carron Beaumonth, programme officer at Mercy Corps Edinburgh, welcomed all the help they can get.

She said: “We have been co-coordinating with our headquarters in America and have had phone calls every day from our team in Haiti.

“The scale of this earthquake is very different and it’s a very confined area with a huge population.

“For us the donations have mainly been cash and that’s fine because shipping has been difficult.

“Having the Scottish Government involved is good for our co-ordination and they have committed themselves to getting the message out to as many people as possible.”