Biker Danny saddles up for 2010 after injury nightmare 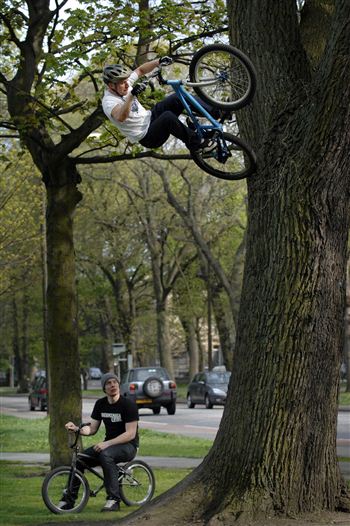 SCOTS YouTube biker Danny MacAskill is back on his bike after an agonising three months out with a broken collar-bone.

The 24 year-old took the internet by storm last year with a video of his dazzling bike skills clocking over 14 million views online.

He landed high-profile sponsorship deals and even film offers from the US.

But his blossoming career hit the breaks in October when he fell in his hometown of Edinburgh and smashed his neck.

Now given the all-clear by doctors, he said: “The time off hasn’t been all bad though.

The five minute video of Danny jumping his bike of Edinburgh’s steepest drops made him an instant star.

He appeared on American TV chat shows and even got an offer to join a Korean circus.

He also pulled off his fearless tricks in a Volkswagen advert, bagging himself a free car in the process.

And despite being ruled out of biking for almost four months in October, the big-hearted Scot – originally from the Isle of Skye – donated the very bike from his famous video to Comic Relief.

The injury came from two falls, thousands of miles apart in California and Edinburgh.

He said: “I just fell on my side in California, but unfortunately I had a fall over here as well and broke it a lot more, and it had to be plated.

But now Danny is gearing up for a year in the saddle haven been given the green light.

He said at the weekend: “I have finally been given the all clear to ride my bike again after three and a half months off.

“I can’t wait to get back to doing sweet skids and wheelies.

“The time off hasn’t been all bad though.