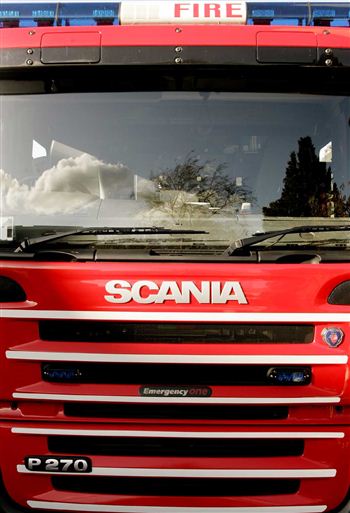 FOUR people have been taken to hospital after a three car pile-up thought to have been caused by poor driving conditions.

A green Skoda was involved in a head-on collision with a Vauxhall Astra, with a third car hitting it from behind.

Fire crews, five ambulance units and police officers raced to the scene of the incident, which occurred on the A703 near Penicuik, Midlothian, on Monday night ar around 9.40pm.

Firefighters freed the two most seriously injured passengers using cutting equipment, after which ambulances rushed four of the five patients involved to hospital.

The incident is the second crash to occur at the accident black spot in several days.On Saturday night a dark coloured 4×4 smashed through a fence and landed in a field after skidding on ice, leaving a man and woman in hospital.

A spokeswoman said Lothian and Borders Police said: “The incident involved a green Skoda travelling north on the A702 losing control and colliding with a Vauxhall Astra travelling in the opposite direction.

“Behind the Astra was a Suzuki Swift which it seems went into the back of the Astra.”

Two women passengers, aged 65 and 36, travelling in the Skoda, were the most badly injured, while the 65-year-old male driver was of the Skoda and a 36-year-old female driver of the Astra were also taken to hospital.

The 43-year-old man at the wheel of the Suzuki escaped uninjured.

A spokeswoman for Lothian and Borders Fire and Rescue said that the collision was caused by “bad road conditions”.

She said: “We attended a road traffic collision involving three vehicles on the A703 at Nine Mile Brae.

“Our crews cut two females from one of the cars and there were several walking wounded patients.”

A spokesman for the Scottish Ambulance service confirmed that three ambulances and a specialist trauma team were at the scene, and took four patients to the Edinburgh Royal Infirmary.