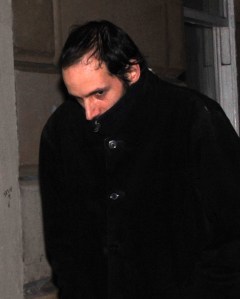 A MAN who twice filmed himself having sex with his dog has been put on the Sex Offenders’ Register for two years.

John Kerr, 30, has also been banned from keeping animals as pets without permission from social workers.

He was caught when he left his mobile phone – containing videos of the disgusting attacks – behind a couch at a friend’s flat in Edinburgh’s Kirk Street.

The clips were reported to police, who told Scottish SPCA officers to seize the Staffordshire bull terrier from Kerr.

He was arrested and admitted “unnatural connections” with the dog by letting it lick his private parts while he performed a sex act on himself.

Unemployed Kerr told police he “could not really say why” he made the recordings, other than they were “really only for himself”.

Today (Tues) a Sheriff ordered him to be “strictly supervised” for under probation for two years.

He left court covering his face with a black scarf.

Edinburgh Sheriff Court previously heard that Kerr’s friend recognised the animal in the videos he found and contacted the dog’s previous owner on November 22.

Fiscal depute Aidan Higgins said: ““The way in which the offences came to light was that a friend of the accused found behind his couch a black mobile telephone.

“He made to discover the owner of the phone and he found on the phone two video clips and it was these video clips which showed the activities mentioned in the charges.

“He was able to identify the accused, he has himself seen the dog previously. He recognised the accused in these video clips.

Detectives interviewed Kerr, of Parliament Street, Edinburgh, and he admitted that it was his dog and that he had been the man in the videos filmed in May or June last year.

He insisted the clips were the only times he had had sex with a dog.

Mr Higgins added: “Once the police officers had viewed the video clips they then spoke to the accused and that was having gone to his home address where they found him along with the dog.

“The dog was taken away to be examined by a vet.

“It seemed at least externally that the dog was uninjured.

“He told police that these video clips were the only occasions on which he had an unnatural connection with the dog and he said that he could not really say why it was that he had made the recordings and that it was really only for himself.

“Efforts are being made to re-house the dog.”

Lawyer John Good said Kerr was a single man and had suffered depression for 10 years for which he had received treatment.

Mr Good added: “There is no clear explanation as to why these offences came to place.”

Sheriff Fiona Reith QC told Kerr: “The best way of providing protection for the community is by means of placing you under a period of intensive supervision with strict conditions.

“You are to undertake alcohol counselling and you are not to keep domestic animals as pets.

“If you were to commit a further offence then you would be brought back to court and all options would be open, including custody.

“The offences to which you have pled guilty are listed in the Sexual Offences Act 2003, and that means you will be placed on the Sex Offenders’ Register.”