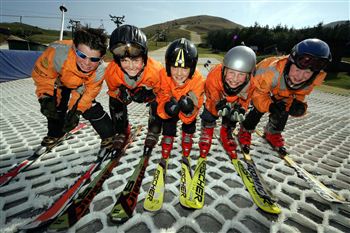 SKI centres are reporting a huge boost in business after the three-week blanket of snow left Scots heading for the slopes.

The white Christmas has fuelled interest in skiing, with bosses saying that the Winter Olympics could send Scotland ski crazy this year.

One centre in Glenshee, Aberdeenshire, said that it had had to hire EIGHT times its usual number of staff.

And they have nearly seen an entire season’s visitors in the last three weeks alone.

Another centre in Edinburgh reported double the number of usual visitors, with a one mile traffic jam of skiers waiting to hit the slopes.Stewart Davidson, director at the Glenshee Ski Centre in Braemar, Aberdeenshire, said that the slopes wouldn’t normally be open until the end of January. 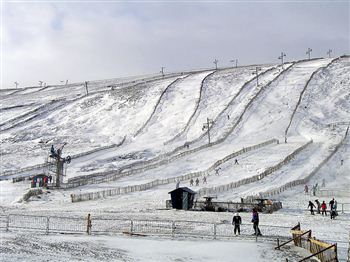 And he said that he has had to boost his staff from 10 to 80 overnight to cope with the demand.

He said: “We certainly have seen the impact of the snow. Sunday was one of the busiest we’ve ever seen.

“This year we started on 23rd December. Our season wouldn’t normally begin until the third week or the end of January, so we’re certainly three weeks ahead already.

“The snow has come and gone before but this year it’s been constant all the way through.

“Certainly for the last eight or nine years it hasn’t been this good, since around 2001.

“We hired previous staff and people from the local area to keep up.

“I think part of it is if people have snow in their back garden it gives them the seasonal allure.

“Often what happens is that the numbers starts to die out in March because it’s bright and green and people’s grass is growing elsewhere, they forget it’s still perfect conditions up here.

The industry is hoping that Winter Olympics will keep up the visitor numbers throughout the season, making it the most successful in more than a decade.

Jo Mathieson, manager at the Midlothian Ski Centre at Hillend, said: “We run ski school over Christmas when all of the children are off, but on top of that the figures were double what they were this time last year.

“We were very busy in particular in the week between Christmas and New Year.

“The access road to the ski centre is a mile long and it was full with cars.

“It coincides nicely with the Winter Olympics, which starts at the beginning of February, and we’re expecting the Wimbledon affect to keep the centre busy then.

“It’s certainly a good start to the year. I’ve been here since 2001 and it’s the longest period of snow we’ve seen.

And Oscar Wild, manager at Bellahouston Ski Centre in Glasgow, said that the snowy period had brought many new pupils to the centre, with the two weeks in January being some of the busiest ever.

He said: “The snow had stimulated interest quite a lot. December wasn’t as busy as we’d have liked, I think we were up by 30 per cent.

“But we’ve taken quite a big chunk of lessons and these two weeks in January have been some of the busiest we’ve seen.

“And for a two week period it turned our slopes into real snowy slopes.

“We’ve not changed anything in terms of campaigns or advertising or anything so the snow is the only thing to explain the change.

“We’re always looking for a beautiful clear night and a bit of frost in the air to get skiers on the slopes in the evening and there’s been plenty of those.”

Phillip Riddle, chief executive of VisitScotland said: “It’s been a great start to the Scottish winter ski season and the best we’ve seen for 10 years.

“Between Christmas and New Year almost 3,000 visitors tapped into our staff’s expertise at the Aviemore VisitScotland Information Centre and accommodation bookings were up 500%, suggesting more visitors have been taking advantage of the favourable ski conditions and enjoying a few days on the slopes.

“Obviously this is a tremendous economic boost for the resorts and regions – for each £1 spent at a ski area, around £4 is spent in the surrounding area benefitting local businesses.

“Anecdotally, feedback from our staff tells us we are getting a lot more enquiries from people north and south of England about skiing holidays in Scotland.

“This very much fits with the continuing staycation trend we saw in 2009. And we’ve seen an increase of visits by 50 per cent to our Winter White website from last year showing that people are really keen to come to Scotland in winter and experience the stunning countryside and all the activities on offer.”