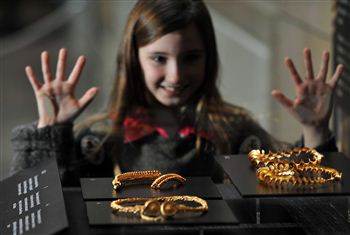 ANCIENT gold jewellery uncovered by a Scottish local has gone on display for the first time.

The Iron Age torcs – or neck ornaments – were dug up by Stirlingshire man David Booth, who had never used a metal detector before.

And now the treasure will be on show at the National Museum of Scotland in Edinburgh for just three weeks.

The four items – which date back to between 300-100BC – are of major historical significance as they show the wealth and connections of Scots at the time.

“Therefore the Treasure Trove Unit has come to an agreement with National Museums Scotland to put the torcs on public display at the museum for a limited three week period.

“This will enable as many people as possible to see these magnificent Iron Age objects before they are valued and allocated.”

Visitors can now admire two ribbon bands and half an ornate torc of southern French origin – the only one of its kind in Britain.

Scottish law states that property which is lost or abandoned – or has no obvious owner – belongs to the Crown.

But Mr Booth could be in line for a massive reward.

The Treasure Trove Unit works on the Crown’s behalf and displays the goods in public museums around the country.