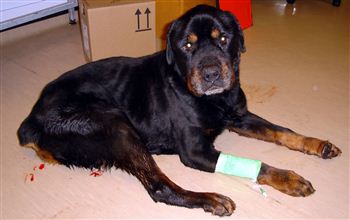 A ROTWEILLER with cancer had to be put-down after its owner dumped it because he was “too embarrassed” to take it to a vet.

Colin Clark abandoned his 10 year-old pet when a tumour grew on its paw.

The 35 year-old tied the dog to a fence in Edinburgh’s Trinity Road last June and left it to starve.

A veterinary expert said it was a quarter short of a healthy weight when a passer-by reported the animal to police.

Fiscal depute Neil Allan said: “On the morning of June 17 a lady found the dog tethered to a fence.

“She called police and it was immediately obvious that the dog was emaciated and unsteady on its feet.

“A vet said the dog was around 25 per-cent below a healthy weight, hugely dehydrated and had a large cancerous growth on its left front paw.

“It transpired that the cancer had spread and the dog was put down.”

It took police nearly six months to link the dog to Clark, but when questioned on December 11 he confessed he had tied it up.

Mr Allan added: “He admitted abandoning the dog saying he did not know what to do with it.

“He acknowledged that it was unwell and said its health had gone downhill within a matter of weeks and that he didn’t want to take it to the vet because he was embarrassed.

“He also said he was concerned that the police might get involved.

“He told police he was depressed and told his mother he had had it put to sleep.

“But he told his partner it had been taken to a dog home.”

Clark was not present in court, so his agent Leanne McQuillan reserved his defence until sentencing next month.

Sheriff James Scott called for background reports and for Clark to be personally present at his sentencing.