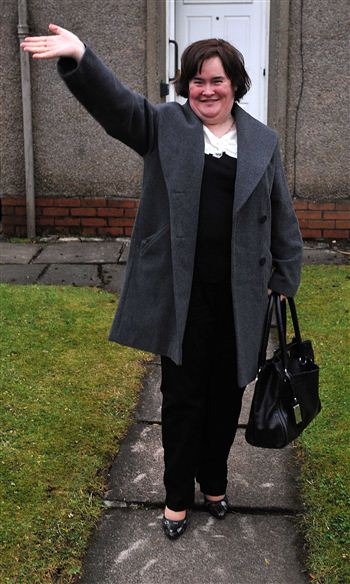 SCOTTISH superstar Susan Boyle stepped out in style in her home town yesterday (Wednesday) as she ventured to the local shops.

The 48-year-old left her home in Blackburn, West Lothian, with a beaming smile and posed for photographs in her new gear.

Her outing comes just a week after reports of erratic behaviour – and growing concern for her ability to cope with stardom.

But with her welcoming gestures and care-free attitude she looked ready for anything.

Underneath her stylish grey knee-length winter coat, Susan twinned smart black trousers with a black top which was set off by a big white bow around the neckline.

And to top it all off, she wore fancy black and white patterned heels complete with a black designer handbag.

The songstress’ hair – which appeared shorter – was not styled and she wore no makeup for the shopping trip.

A week ago Susan was dressed to the nines for her highly-anticipated appearance on America’s Oprah Winfrey TV chat show.

She emerged transformed in a long brown fitted gown and dangly diamond earrings for her second interview with the world-famous host.

But only a day earlier, Susan had launched a foul-mouthed rant her local café in Blackburn.

She stormed into the diner and complained to staff about her PA who apparently told her she needed to go on a diet.

The next day – whilst waiting to travel to Chicago for the Oprah show – she stunned passengers at Heathrow Airport when she started singing and dancing with a mop.

The Britain’s Got Talent star – who has sold more than four million copies of her debut album worldwide – has been under the spotlight since her TV appearance last year.

Susan’s spokesman said the airport incident was Susan being ‘playful’ and that Susan apologized for any offence she caused.