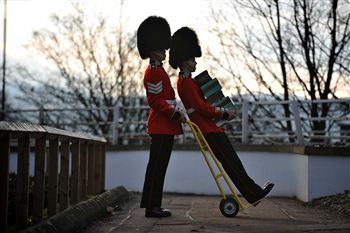 SCOTLAND will send 1,000 troops to Afghanistan over the next six months, it was announced today (Thursday).

The massive deployment will see regiments from every corner of the country jetting out to join NATO operations in Helmand province.

While the new battalion was said to be “raring to go,” the current band of Scots troops sweating out the final weeks of their deployment will be marching on their stomachs thanks to a big hearted ex-soldier.

To coincide with the latest troop deployment, Ali Sutherland arranged a special delivery to the Royal Scots Guards in Afghanistan.

He has sent hundreds of morale-boosting boxes full of home comforts including brown sauce and tea bags to help the frontline Scottish soldiers to beat the January blues.

The 750 packages also contain letters handwritten by the Edinburgh schoolchildren and churchgoers who donated the goods inside.

The truckload of generous gifts set off yesterday morning (Thurs) ahead of the MOD announcing the names of 1,000 troops who will deploy in April.

The latest deployment is made up of members of the Scots Guards, the Scots Borderers, 1 SCOTS, and two Squadrons from the RAF Regiment at Lossiemouth, tasked with the security of Kandahar air base.

The new troops will be supported by 600 reservists, including medics from RAF Leuchars undertaking surgical roles at Camp Bastion.

Serving abroad is an often “bleak” and lonely time for soldiers according to Ali, 52, who dreamed up Parcels 4 Troops while serving in Northern Ireland with the Royal Corps of Transport.

He said: “This is a show of support from the public of Scotland to the troops in Afghanistan.

“We are not saying they aren’t well fed, we are just sending basic items which – when you’re out there for up to eight months – can seem like luxuries.

“Without the help and support of the general public, life for soldiers serving abroad can be bleak. 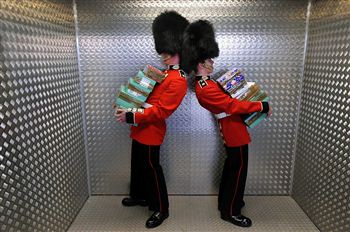 “I know from my own experience of receiving packages from my mum while I was serving that it’s an overwhelming feeling as a soldier in a foreign land to receive a hand-written letter saying the people of Scotland back home are supporting you 100 per-cent.”

The shoebox-sized packages are crammed with Cup-A-Soups, batteries, sauce to spice up rations, shortbread and toothpaste.

Even getting an unusual flavoured chewing gum can brighten up a soldier’s day according to Rev Alan Cobain, who served for five years as a chaplain for the Scots Guards in Iraq and Afghanistan.

Children from his congregation at St Nicholas Church in Edinburgh’s Sighthill helped by donating goods for the boxes.

He said: “I have been a recipient of these boxes in the past, both in Iraq and Afghanistan, and it was always the letter inside that gave you a boost.

“It’s like a wee line linking you back to home and suddenly it hits you that people are thinking of you and taking the time to let you know the difficult job you do is really appreciated.

“These places are very far removed from home here in Scotland and you often feel isolated, so something simple like getting a different type of chewing gum can be genuinely invigorating.”

Captain Stewart Bridgehouse of the Scots Guards said he was “humbled by the generosity of those who donated to Parcels 4 Troops.

Receiving the parcels on behalf of the Army in Scotland, he said: “The battalions don’t expect these boxes or know when they are coming.

“Each parcel will be hand-delivered and I know from personal experience that each solider looks forward to receiving them.

“No matter what the contents, everything inside helps to make life a bit more durable and little luxuries such as sachets of HP Sauce or anti-bacterial hand wipes can boost morale no end.”

The troops chosen to be deployed in April are “raring to go” according to Lieutenant Colonel Charlie Herbert, commanding officer of 1 SCOTS.

He said: “We have had a company of men out in a small frontline base over the past six months doing some excellent work alongside our Edinburgh neighbours, 3 RIFLES.

“They have sent us many useful reports and now the rest of the battalion is raring to go and build on their achievements.

“One of our tasks will be to help train the Afghan National Army, so they can provide their own effective defence force.

“We know the dangers we will face, but have the right training and equipment to meet them head on.”

Air Commodore Harry Atkinson, said: “Our people receive excellent support from their families and communities throughout Scotland, for which I am most grateful.

“That encouragement boosts morale and gives our men and women great strength when they are far from home.”

Mr Robertson, whose Moray constituency takes in both RAF Lossiemouth and RAF Kinloss, said: “We wish our brave servicemen and women a safe return from Afghanistan. They do a great job under very difficult circumstances and our thoughts are with them and their families at this uncertain time.

“As they serve on the front line, they need to know that diplomatic and other efforts back homes are seriously focussed on ending the conflict in Afghanistan.

“Today’s developments in the House of Commons underline the need for a considered UK strategy aimed at ending the conflict and bringing our troops home once and for all.”

Most of the forces will deploy in April, with some going later in the Summer.

In addition, 50 medical reservists from 205 Field Hospital in Glasgow are travelling this week to Afghanistan, to run the state-of-the-art hospital in Camp Bastion.

The majority of 9500 UK forces will be spread around Helmand, commanded by 4th Mechanized Brigade which takes over from 11 (Light) Brigade in April.