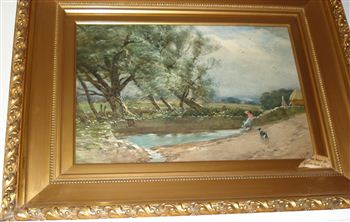 A VALUABLE work of art that was stolen from Scotland’s most renowned law library has been returned in the same mysterious circumstances under which it was taken.

The missing painting – worth £4000 – was found hanging on the back of the gate leading to Edinburgh’s Signet Library on Parliament square early yesterday morning.

The piece, named ‘I Cannae Hear Ye’ by Borders artist Tom Scott, was stolen from the library’s basement on New Year’s Day during a sedate public discussion on John Knox and the Reformation.

Forensic specialists at Lothian and Borders Police are now examining the painting for clues that may reveal who had taken it.

Robert Pirrie, chief executive of the Society of Writers to Her Majesty’s Signet, last week offered an amnesty to the thief if they returned it to the library.Yesterday he said he was thrilled to have the painting back, but that it was still a mystery as to why it had been taken in the first place.

He said: “It was found this morning at 8.15am when the building was opened up by one of our hall keepers.

“It was hanging on the back of the gate by its picture cord at the west entrance on Parliament Square.

“There was no note left with the painting, and it appeared to be undamaged.

“There’s been a lot of publicity attached to the theft and it would have been very difficult to have sold the painting on.

“All of the auction houses and galleries were aware that it had been stolen, we’re just glad the person who took it returned it, rather than just discarding it.

“It’s now been taken away to be examined by the police.

“It was a mystery as to why it was taken in the first place and its return only adds to the mystery.

“We’re delighted to have it back and we’ll be thinking very carefully where to hang it now.”

A police spokesman said: “Obviously, we are delighted for the library that the painting has been returned.

“Nevertheless, we still must establish whether any criminality was involved when the painting was taken.