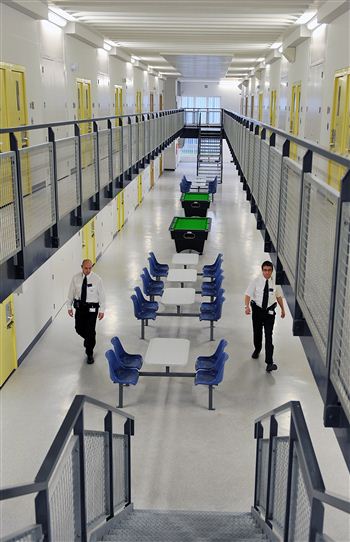 HUNDREDS of Scots prisoners are being used as human lab rats – to find a cure for their criminal tendencies.

Scientists from the University of Oxford are performing a pharmaceutical study on Scottish prisoners intended to suppress their anti-social behaviour.

Hundreds of inmates are taking part in the scheme, which sees them supplement their diets with Forceval and Eye Q Mind – nutritional supplements thought to reduce violent behaviour, drug-taking and self-harm.

The prisoners on the treatment programme are inmates at HMYOI Polmont, with 450 at the Young Offenders Institution participating in the study and a further 400 taking part elsewhere in the UK.

The study is funded by the Wellcome Trust – the UK’s richest charity with an endowment of around £13 billion – who are providing £1.4 million towards the experiment.

Tom Byrne, pharmacy and health adviser to the Scottish Prison Service, denied that any incentives were offered to inmates in exchange for volunteering for the programme.

He said: “At the end of the day, prisoners get involved to improve their behaviour, and for the chance not to have to return to one of our facilities.

“We have a prison ethics committee, and the committee gave their approval before the study was started – everything has to be approved by us before studies like this start.

“We perform studies like these purely to see if it can have an effect on inmates’ behaviour.”

According to information obtained through the Freedom of Information Act, no prisoners have recorded any ill-health as a result of taking the behaviour-altering nutrients, although one feinted during blood sampling.

The study – which has been determined under EU law not to be a “clinical trial” – provides prisoners with Forceval, a vitamin-mineral supplement, and Eye Q Mind, a fatty acid supplement, as part of their regular diet.

The behaviour of this group is compared with a control group under double-blind conditions.

Sir Mark Walport, Director of the Wellcome Trust, said: “If this study shows that nutritional supplementation affects behaviour, it could have profound significance for nutrition guidelines not only within the criminal justice system, but in the wider community – in schools, for example.

“We are all used to nutritional guidelines for our physical health, but this study could lead to revisions taking into account our mental health, as well.”

The trial builds on research already carried at a maximum security Young Offenders Institution in England, where prisoners who consumed an “active nutrient capsule” were less likely to commit disciplinary offences.

37 per cent fewer violent offences were committed by inmates taking the supplement at MHYOI Aylesbury in Buckinghamshire, compared with a group supplied with a placebo.

Richard Baker MSP, Scottish Labour’s Justice spokesperson, said: “It will be interesting to see the results of this study, but I think that ensuring criminals have proper balanced diets, a focus on improving issues like literacy and plenty of work to do in prison would produce very effective results.”

The treatment programme at HMYOI Polmont is run full-time by research staff from the University of Oxford, and prisoners are entitled ask to continue active treatment for three months once the study ends.

The study runs for three years and started in May 2008.