Centrepiece staircase at Botanics closed due to damage 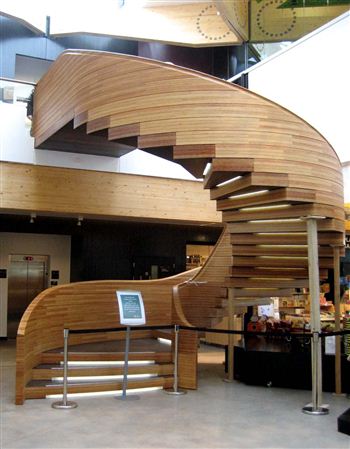 BOSSES at the cash-strapped Royal Botanic Gardens (RBGE) face a hefty bill after the centrepiece staircase of their new £15m building started to split.

The spiral stairs – part of the John Hope Gateway that opened in Edinburgh last October – have splits in the laminate covering the wood.

The stunning stairway is currently being supported by three wooden struts, and duct tape is plastered over the banister in one place.

Although staff insist they are perfectly safe to use, they have closed them down while architects try to find a solution.

But with £1 million lost in the Icelandic banking collapse last year, the charity can’t afford to spend much more on the building.

“Splits in the laminate”

With the staircase shut since January 12, bosses at the RBGE – who run four gardens across Scotland – are waiting to hear what options they have to fix the problem.

Until the popular attraction receive a the report from architects they say they won’t know how much it will cost, or how long it will take before the staircase is back in use.

Ian Lawrie, Head of Facilities Management at the gardens, said that the impressive staircase had been causing problems from the outset.

He said: “Basically we have been having problems with the stair ever since the building opened.

“There’s a bit of movement and it caused there to be some splits in the laminate.

“We’ve had a meeting with the structural engineers who say that it is still safe for public use but we felt we needed to close it because more usage would lead to more damage.”

Mr Lawrie said structural engineers came up with fixes for the damaged stairs, and passed them on to the architect firm behind the sustainable building, Edward Cullinan Architects’.

The RBGE is now waiting to hear back from them to see what options they have.

Mr Lawrie said: “Anything we want to change we have to run past the architects.

“We don’t know what the solutions are as yet but we will have to consider them when they come in.

“We’ll take into account the amount of inconvenience in terms of what we have to do, how much it is going to cost and how long is it going to take.”

The architects are due to send their report to the charity this week, but in the mean time the staircase remains shut.

Visitors who want to visit the Gateway Café upstairs in the John Hope Gateway have to take the lift or alternative stairs.

Mr Lawrie added: “We have worked around it – the staff at the Gateway Café have been coping with it, and the public have been very good.

“We want to make sure any work we do doesn’t have too much inconvenience for the public.”

The John Hope Gateway opened in October 2009 after two years of construction work.

Bosses at the gardens considered introducing a £4 admissions charge last year when it was discovered that they lost £1 million in the Icelandic banking collapse.

But the idea was dismissed, and it is hoped that they will get back at least half the amount lost.