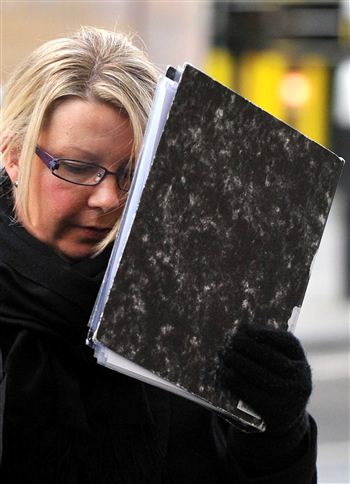 A NURSERY nurse who swindled over £20,000 from a council by faking head teachers’ signatures on time sheets has avoided a jail term.

Isla Heenan, 31, spent three years claiming cash for supply shifts she had never done by signing-off her own documents under the names of teachers from schools across the capital.

The court was told she was suffering from severe anxiety during her criminal spell, but “maintained a façade of normality” to her colleagues.

But eventually council staff spotted her handwriting on the forged documents and police charged her with defrauding the City of Edinburgh Council.

The mother of one confessed to the scam, claiming she was depressed and dependent on medication.

She was ordered to do 180 hours of community service today (Wednesday) at Edinburgh Sheriff Court after earlier admitting fraud.

But Heenan will have to return to court in March to face a confiscation hearing, where she will be ordered to pay the cash back.

Fiscal depute Gerard Drugan had told the court that the Penicuik woman was employed as a supply nursery nurse on a rota basis and would be called in by schools when needed.

But she was “full and frank” when officials snared her ploy to pocket cash for made-up shifts.

He said: “Apparently the accused’s father passed away in 2004 and thereafter she suffered from depression and became dependant on medication.

“She accepted that the forged signatures on the claim forms were all done by her hand and she received the money she was not entitled to.

“It would appear that during the interview she gave a full and frank admission to her sole involvement.”

She said: “Mrs Heenan’s father passed away in June 2004 and at that time she was suffering from severe anxiety and having panic attacks.

“She was sometimes travelling to school and then failing to be able to leave the car park.

“Yet she was able to maintain a façade of normality despite her difficulties.

“She accepts full responsibility for her actions and has been assessed as being of low risk of reoffending.

“She is someone who has found the criminal justice process extremely upsetting.

“She has been employed for most of her working life, has a stable family life and her husband has accompanied her in court throughout.”

Sheriff Kathrine Mackie said: “Mrs Heenan, you are clearly aware that this is a serious matter.

“And given the nature of the offence, a custodial sentence must be in contemplation.

“I have considered the information before me, and what has been said on your behalf, as well as particular regard to a medical report.

“In the circumstances I am satisfied that there is an alternative to custody.”

A confiscation hearing regarding the cash owed by Heenan was scheduled for March 17.