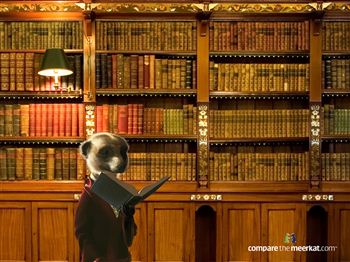 CULT meerkat Aleksandr Orlov’s life could be a lot less ‘seemples’ if rumours of the patter of tiny paws are to be believed.

Speculation is rife after a film crew shooting a new advert for Compare the Market in Edinburgh tried to buy an antique pram from a charity shop.

When the Royal Mile shop said that the Victorian-style pram was not for sale, the film crew insisted and gave them £25 to borrow it for their two days of filming.

Now fans of the wacky ad are convinced that the meer-cart has signalled the arrival of mini meerkats.

Andy Moody, a manager Mary’s Living and Giving shop, said: “It was a woman who asked us and seemed quite embarrassed when she said it was for the new advert.

“They had just come into the shop – it’s not as if they could see the pram from the window.

“However, when they saw it they really wanted it.

“I thought it must have been for some sort of period production, not the meerkat adverts.

“We got really excited though – our pram could be famous.”

Andy said that the crew were determined to have the pram, and struck a deal to hire it for two days for £25.

Russian Aleksandr Orlov shot to fame after appearing in the oddball adverts, where he explains the difference between his meerkat social networking site and a similar car insurance site.

Another manager, Barbara Williams said that she hoped that the new advert was for the unveiling of Aleksandr’s new family.

She said: “The adverts are absolutely fabulous, I love them.

“We’re delighted and cannot wait to see our pram on television.

“We’re all keen to know though – does this mean Aleksandr is going to have Meerkat babies?”

A spokeswoman for Compare the Market said they are currently working on the advert, but would not reveal what role the antique pram would play.

She said: “The advert will be coming out in the next couple of months.”

The first advert in the series famously featured Bagpipekat, who wears full highland dress and lists his hobby as “musical noise”.