A BITTER dad has hit out at NHS managers who wrongly accused his son of fraud after they were criticised over the lead-up to his son’s death. 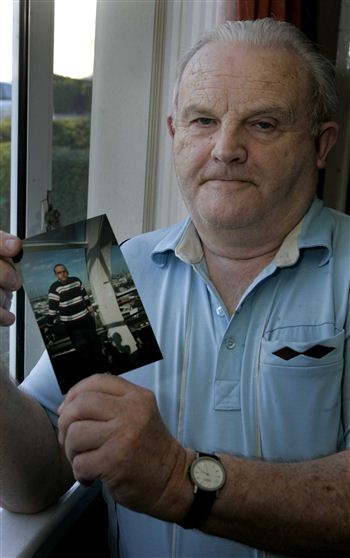 Brian Gilfillan, 36, killed himself on October 28, 2008 – the day he was due to face a disciplinary hearing for putting his boss’s signature on stationery orders.

But a sheriff this week insisted Brian should not have been accused of fraud and added that what he did was not serious misconduct.

Brian’s father William said that managers who accused him of fraud and sent him a letter saying he could be dismissed over it, had “blown it out of proportion” and “ripped his family apart”.

Mr Gilfillan, 71, said “It seems that the people that are to blame, there’s nothing happening to them, that’s my main concern.

“Part of the trouble was these managers didn’t know the meaning of the words and that is what caused it to go on and on.

“The whole thing was blown out of proportion and it’s a pity it had such tragic circumstances.

“My family has been ripped apart now by this.

“I have certainly had his name cleared by the sheriff, but I’m wanting it cleared by the NHS and the public because the terms fraud and forgery are their words, not mine.

“I’m bitter against them. I see them as having taken my son away from me.

“It was a build up of cock-ups along the way.

“It is quite obvious that there are people in jobs that are not qualified for the positions they hold.”

Brian took his own life on the day of his disciplinary hearing, just yards from his office at Forth Bank Hospital in Kirkcaldy, Fife.

He was found hanging in the grounds of the hospital where he worked as a supervisor in NHS Fife’s records department.

In a written judgement following a two-day Fatal Accident Inquiry held in Brian’s home town of Kirkcaldy last month Sheriff Andrew McCulloch said that the three managers dealing with his disciplinary hearing had “misdirected themselves” by following the assumption Brian’s actions were fraud.

Sheriff McCulloch said the three managers – Anne Starkie, Valarie Anderson and Karen Laird – who dealt with the disciplinary procedure had incorrectly labelled Brian’s behaviour and added that he did not believe what had been done was serious misconduct.

He said: “Three employees (Starkie, Anderson and Laird) all misdirected themselves with regard to fraud. It is quite clear that there was no fraud on the part of Mr Gilfillan.

“I would not classify the actings of Mr Gilfillan as serious misconduct. He was certainly misguided in signing Mrs Starkie’s signature, and it did create a breach of trust between them.

“A first warning ought to have sufficed, together with proper training and guidance on the correct procedures to be adopted for stationery ordering during the absence of the manager.”

Sheriff McCulloch said that NHS Fife should formally address the lack of concern for employee welfare during disciplinary proceedings.

He said:”I note that the discipline policy, contained in the management of employee conduct policy document produced by NHS Fife, does not deal with the issue of employee welfare during the whole period of the disciplinary action. This is something which ought to be formally recognised, and addressed.”

However Sheriff McCulloch said that Brian’s death could not be foreseen and added that he was “unable to accept that any defects in the working of the discipline policy contributed” to his death.

NHS Fife said they would consider the findings in detail.

A spokesman for the health board said: “NHS Fife would again like to take the opportunity to express its sincere condolences to the family and friends of Mr Gilfillan.

“We note in Sheriff McCulloch’s findings that ‘there were no reasonable precautions whereby the death might have been avoided’ and ‘that there were no defects in any system of work which contributed to the death’.

“We also note the references to the employee conduct policy and will be considering the findings in detail.”