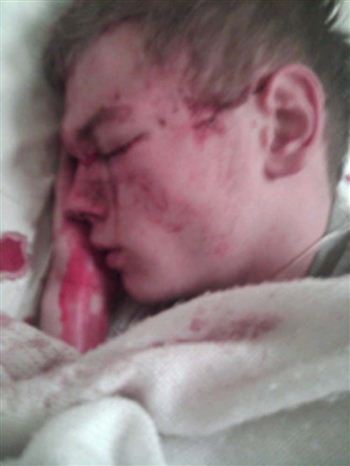 A TEENAGE builder who was brutally beaten in a late night assault which saw him lose an eye has blasted the thugs who attacked him, saying: “They’ve just taken my eyesight away from me.”

Eddie Watt was heading home from a night out with friends in Edinburgh when he was set upon by two men who battered him with a chain and a baseball bat.

The 19-year-old was left in a pool of his own blood near to his home in Oxgangs in Edinburgh late on Friday night before he was rushed to hospital.

Paramedics found the labourer with his left eye “spilling out” of his eyelid and raced him to hospital in attempt to save his sight.

The badly bruised teenager – whose eye is still swollen shut – said he remembers little of the attack which began after he tried to chase away a dog which had been barking at them.

Eddie said he was initially attacked by a man with a chain in the first incident shortly after leaving the Merlin bar in Edinburgh’s Morningside area.

He was then set upon a second time when the thugs came back for him as he walked home towards Oxgangs. 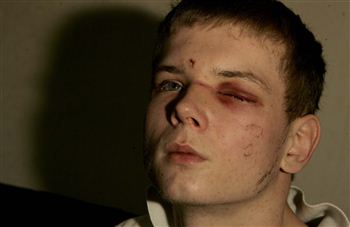 Eddie, who works for Balfour Beatty on the National Museum of Scotland refurbishment, had an emergency operation early on Saturday morning, before being told it was unlikely he would ever see with his left eye again.

He said: “I was in a lot of pain when I woke up, and I was confused, I didn’t know what was going on.

“The eye specialist said it was the worst he’s seen.

“They tried to save the eye so I don’t have to wear a prosthetic.

“It’s still weeping fluid now and there’s a stitch in my eyeball.

“I’ve also got a staple in my head from when they hit me with the bat.

“They’ve just taken my eyesight away from me.”

He added: “I’m just hoping I can go back to work.

“If I lose my eye I’ll have to wait a couple of months and then I’ll have to see if I can go back to work at all.

“It’s my sister’s birthday on Friday, she’ll be four. I’m hoping I’ll make it to her party.

“I’ve told her I won’t miss it, despite everything that’s happened.”

His mum Shirley, 41, had to leave her daughters Jessica, three, and Bethany, one, with dad Steve, and rushed to Edinburgh Royal Infirmary to find her son had been blinded in one eye.

Halved his eyeball in two

She said: “They’d almost halved his eyeball in two – that’s the best way to describe it.

“The contents of his eye were coming out – hanging out – I’ll never forget that.

“To get a phone call at 1am in the morning saying your son is seriously ill is not a good feeling.

“I wouldn’t wish that on my worst enemy.

“The fact that it was two grown men gets me more than anything – fully grown men with weapons did this to my son.

“They even went away to get weapons and came back again.

“I want the police to catch them and for them to get what they deserve.”

Lothian and Borders Police said the attack happened at around 11.30pm on Friday night.

In a statement, they said; “The man and two friends were walking past a communal grass area leading from Pentland Drive to Oxgangs Bank when an unleashed dog ran towards them and began barking.

“The group attempted to kick the dog away before its owner began to argue with them.

“The man became separated from his friends when the owner of the dog assaulted him with a metal dog chain.

“A second male also became involved and assaulted the victim with a wooden stick.

“The man suffered injuries to his head and face and was taken to the Edinburgh Royal Infirmary where it was confirmed that he would lose his eye.

“Police are now appealing for anyone with information to assist with their investigation to come forward immediately.”

They said the first suspect was white, 30-years-old, 5ft 8ins tall with a large build. He was wearing a beanie hat and a light-coloured sweater and carrying a metal dog chain.

The second suspect is described as white, between 35 and 40-years-old, 5ft 9ins tall with a large build. He was wearing a dark-coloured t-shirt.

It is believed the dog was a black Labrador.

A police spokesman added: “This is an appalling act of violence that has left the victim with a serious and permanent injury and disfigurement.

“We are keen to speak to anyone who can assist with our enquiries and ask that anyone who recognises the descriptions of the suspects and can help us locate them contacts police immediately.”