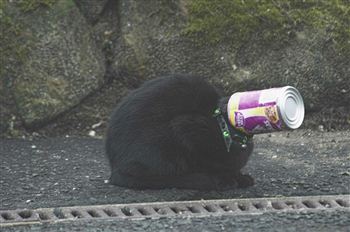 A LUCKY black cat managed to find an animal rescue centre with its head wedged in a can of food.

The disorientated moggy was discovered by Scottish SPCA staff in Middlebank, Fife, on Sunday morning.

And the hungry female feline – who had tried its luck with an empty can of cat food – was freed from the restricting blindfold.

Colin Seddon, manager at the Scottish SPCA’s Wildlife Rescue Centre in Fife, said the cat was lucky no damage had been done.

He said: “We think it’s likely that she was scavenging and came across this discarded tin of cat food.

“She may have got the can stuck on her head and then became disorientated, it’s lucky she wasn’t hit by a car.

“She is a friendly and well looked after cat and she was wearing a distinctive black collar with bright green cats eyes imprinted on the material.”

Staff at the centre are unaware if the cat is a pet after failing to find an local owner. 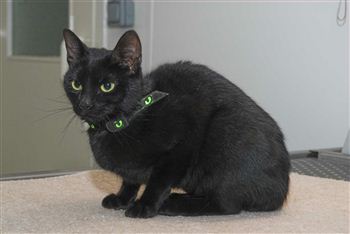 Mr Seddon added: “She may be a stray or she could have been dumped here by someone thinking we are a rehoming centre for domestic pets.

“Because she’s in such good condition we’d hope that she’s simply lost.

“If that is the case then we’d encourage her owner to contact our animal helpline to get their lucky black cat back.”

Anyone with information relating to the cat can contact the Scottish SPCA Animal Helpline on 03000 999 999.