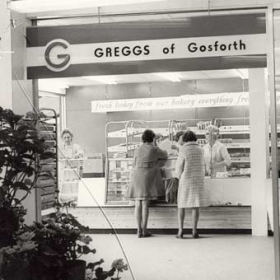 THEY are famous for their huge lunchtime cues, cheap and cheerful service and cut-price sausage rolls.

But now new Greggs bakeries across the UK are to be fitted with polished wood fittings, soft lighting and gourmet coffee.

The revamped look is part of a marketing blitz to take the discount chain upmarket as brands like the Czech carmaker Skoda have done in recent years.

And the group has even ditched Paddy McGuinness, the Bolton comedian, from its new advert, in favour of the Gracie Fields’ classic ‘If I Knew You Were Coming I’d have Baked a Cake’ in an attempt to portray the brand as a classic British bakers.

They also hope to boost the fortunes of the chain – which opened its first store in Tyneside 70 years ago – in the south of England.

Greggs have said that they will open around 60 stores across the UK this year, testing a number of different furnishings, but have not yet set on a style for Scotland.

Ken McMeikan, Greggs’ chief executive, said that the move to was bolster the business against competition from Pret A Manger, Subway and Starbucks.

He said: “By making it a much more enjoyable shopping experience, the customers get to see more quality, more of the products and we’re seeing more customers come in who haven’t tried Greggs before.

“This is a more crowded high street that five or 10 years ago.”

McMeikan added they hope to give the stores more of a coffee shop experience, after customers complained that queuing was too stressful.

He said: “There was a pressure point at the queue, with shoppers feeling a little pressured because you had people behind you and you have a make a decision.”

Greggs have now moved the counters back from entrances and highlighted that their sandwiches and pasties are made within each store.

McMeikan added: “We have got everyone from barristers to builders.”

He said: “If people are already aware of the brand, then you don’t have necessarily have to reiterate what they already think about you, particularly when you’re trying to shift brand perception – the classic case would be Skoda.”

He added that the challenge would be to emphasise the quality of the brand, without losing its position in the market as a supplier of cheap pies and pastries.

Nick Coulter, retail analyst at the investment bank Numis, said: “Most of the City has been screaming at them for the last 18 months to let their prices go up, but they have jealously guarded the value part of their offer.”