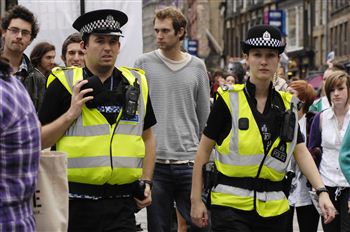 POLICE are on stand-by for possible violent clashes between thousands of right wing extremists and anti fascist protesters this weekend.

Anti racist campaigners are expected to march in numbers through the streets of Edinburgh on Saturday in protest against the Scottish Defence League (SDL).

The SDL plans to hold a gathering in Edinburgh on the same day, but details have so far been shrouded in secrecy. SDL is the Scottish branch of the so called English Defence League formed in response to Islamic protests against soldiers’ homecoming parades.

Police have been preparing for weeks after previous similar gatherings across the UK ended in serious violence sparking real fears of a potential repeat in Edinburgh.

The SDL do not have permission to march and will only be allowed to hold what is called a ‘static protest’.

Police do not actually have the authority to break up a spontaneous gathering unless it is likely to cause public disorder, but have vowed to crack down on any troublemakers.

Sources said that they will deal with any such trouble “firmly but fairly”.

A promotional video for the planned SDL gathering posted on YouTube mentions the Lockerbie bombing, the murder of Kriss Donald and the Glasgow Airport attacks before going on to rally support for the organisation.

They also brand Respect MP George Galloway a “traitor” – showing pictures of the politician being arrested and starring on Big Brother.

During the video, both the Rangers and Hearts football badges are shown.

A scheduled game between Hearts and Hamilton at Tynecastle has been moved to Sunday in order to free up police resources.

Scotland United Against Racism and Fascism gained permission to march through the streets on Saturday as part of what it says will be a peaceful demonstration against the SDL.

United Against Fascism Scotland, one of the groups taking part, said: “We had 3,000 – 3,500 taking part in Glasgow, and though Edinburgh is smaller, we would hope to approach that figure.”

Dave Moxham, an assistant secretary with the STUC, has been involved in organising the march.

He said: “Scotland united Against Racism and Fascism grew up from a desire to ensure that the SDL and EDL don’t come to Scotland.

“We don’t want these groups spreading their poison in Scotland, where we are proud of our multiculturism.

“We do not condone any violence and we are working with the police to ensure our route does not come close to any SDL who decide to turn up.”

The Scotland United protest will gather at the Ross Bandstand in Princes Street Gardens at 11.30am for a rally.

The march itself will kick off at 1pm on a route which will take them up The Mound and along George IV Bridge and Potterrow to the Meadows.

Shami Khan, chairman of Edinburgh and Lothians Racial Equality Council said: “We want to show that the Muslim community are united against the SDL.

“We will stay peaceful because if there are clashes, then what’s the difference between us and them?”