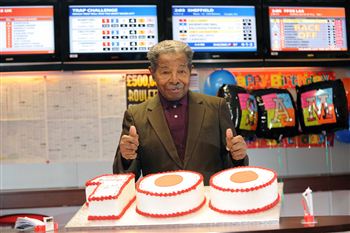 Sam Martinez was presented with a cake as well as £200 worth of free bets and a £100 charity stake.

The pensioner attended his local Ladbrokes in Wester Hailes, Edinburgh, with family and friends for a party held in his honour.

As a regular visitor to Ladbrokes, Sam was congratulated by staff and customers and was the centre of attention for the afternoon.

Sam said: “It’s been wonderful today – I have received so many cards and gifts and to have my family here with me is just great.

“I come here nearly every day but I don’t put much on – just about 5p each way.

“Everyone here is really nice and I want to thank them for doing all this for me.”

Sam arrived in Scotland in 1942 from his native Belize to work in forestry during the Second World War.

He worked near Inverness before moving to Edinburgh to start a new life more than 60 years ago.

In 1956, Sam met his wife Mary, and they went on to have six children – five of whom live in the area near their father today.

Sam’s daughter, Carol Martinez De Hoyo, said she was proud of her father.

She said: “We’re so proud of him, every single day. I think his life has been hard for him and he has had a difficult time but he is always so positive so we have never seen that negative side,

“We were brought up with a lot of love which is so important and we are a very close knit family.

“We wouldn’t change anything as he was always there for us.

“I’ve never seen so many cards before in my life – it’s great that so many people have thought about him today.”

Sam’s experiences of immigration were told in TV documentary, The Tree  Fellers, and he also featured in an exhibition at the Imperial War Museum in London.

Despite working until the ripe age of 94, he has refused to slow down and continues to live an active lifestyle in the community – even as an avid fan of Hibernian FC.

And the trips to his local betting shop have become somewhat of a tradition.

Sharon Stephen, deputy manager of the branch who has worked for 12 years, said: “He’s been coming in here for 30 years and he is the same today as he is every day – he’s fantastic.

“I’m in awe – he’s always happy go lucky, cheerful and telling us stories of his life.

“I agree with so many people who know him who have said that if there were more people like Sam in the world, then the world would be a better place.”

Yesterday Ladbrokes also presented a cheque for £1000 to local community hub The Dove Centre where Sam spends a lot of his time.

Jane Kay, chairperson at the centre, said: “The centre opened in 1991 and I think Sam has been a member since then – he’s just wonderful and he is a great inspiration.

“Over the years that I have known him, he has never changed and nothing seems to get him down.

“To have a man in your life like that is an inspiration – everyone that knows him is inspired by him.”

The Most Shocking and Crazy Bets in History