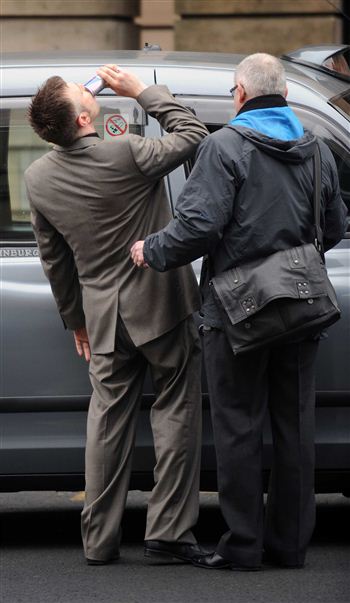 REDBULL-swigging actor Darren Day was given his wings again today (Thursday) after his trial over a weapon was postponed.

The 41 year-old travelled to Edinburgh Sheriff Court from Yorkshire to face trial for allegedly having a Kubotan keyring baton when stopped for drink driving in the capital last December.

But after just three minutes in the dock, he was sent away as the court was told a defence witness had not shown up.

With a driving ban hanging over his head, a worried looking but smartly suited Day downed a can of Redbull outside court.

Day was “anxious” to have the trial heard yesterday according to his solicitor.

Asked whether he was too busy return to court next month, the former I’m a Celebrity Get Me Out of Here contestant told his lawyer: “I don’t think so, I mean, whatever.”

Until the weapon trial is complete, the former stage and screen star will remain banned from driving after being arrested drunk at 4am behind the wheel of a Mercedes.

He spent 24 hours in police cells in Edinburgh, where he was performing in the Queen musical “We Will Rock You”.

Last month he confessed to having 58 microgrammes of alcohol in his breath – nearly double the drink-drive limit – when arrested in the capital’s Manor Place on December 18.

But he has always denied possession of a weapon.

Defence agent Robert Fraser told court: “Whilst I am in a position to proceed to trial today, I have one defence witness who can’t be here today.

“I’m quite content for the trial to be part-heard today.

“My client has travelled from Englas and he is anxious for matters to complete as soon as possible.”

Fiscal depute Neil Allen told Sheriff Roderick MacLeod: “It comes down to your lordship’s view of the desirability of a part-heard trial.”

But the Sheriff discharged the trial, indicating he would rather hear the whole of Day’s trial in one day rather than in two parts.

The former television presenter’s arrest one week before Christmas left theatre staff sweating over whether he would make it to the sold out show on time.

With the Queen musical long finished, Day has left his temporary Edinburgh residency and was bailed to his home address in England.

Police seized the Mercedes he was driving and it remains impounded by the Crown pending Day’s trial and sentencing next month.

Gordon Ramsay reacts to “female” version of himself