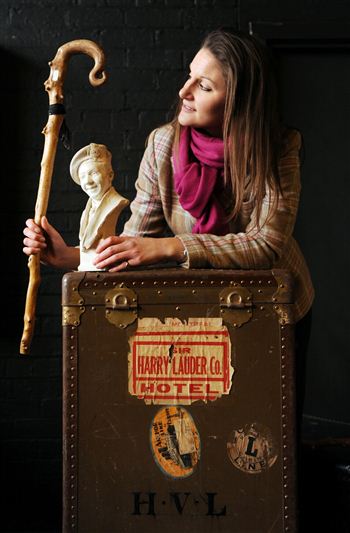 A BOX of treasures that used to belong to one of Scotland’s biggest entertainers is going under the hammer next month.

Fifty of Sir Harry Lauder’s signature possessions including his walking stick, travelling chest, a kilt, sporran and signed photographs were discovered in a dusty attic after 17 years.

The talented comedian, singer and entertainer – who counted Sir Winston Churchill amongst his friends – was born in Portobello.

Two of his great nephews, Harry and Colin Valance, have put the items up for sale on March 6 at Shapes Edinburgh Auction.

Harry Vallance, 56, said that they had decided to sell them so that others could appreciate them.

He said: “We had forgotten about all the memorabilia until we went into the attic and found the chest.

“The items were left to us by our aunt after being passed down in the family from his wife, Ann Vallance, but we felt they could be better enjoyed by big fans.

“We were going to pass them on to our daughters, but we think they can be better appreciated by private collectors or a museum.

“The cane is particularly special. It looks like a shepherd’s crook and can be unscrewed and put into the chest.

“He took it with him on a lot of his adventures.”

Colin Vallance, 50, who lives in Connecticut, said that he also had a number of items tucked away in his attic, adding that there could be another sale.

He said: “I am sure there are several items in the loft, including bag pipes, walking sticks and golf clubs given to my great uncle from Charlie Chaplin.

“We also have a silver tea set that we believe was given to our grandfather, who used to chauffeur and later managed Sir Harry, and our grandfather’s diary.

“He used to write down all the journeys, problems, and adventures Sir Harry had.”

Senior auctioneer Paul Howard, at Shapes, estimates that the items range in value from £50 to several thousands.

He said: “This is a very exciting collection that will allow private individuals to acquire something unique that has never been in the market before.”

Sir Harry was once one of the highest paid performers in the world, earning the equivalent of £12,700 a night plus expenses.

He was also the first British artist to sell over one million records.

The star was well-known for performing in full Highland dress and singing songs with Scottish themes.

He penned the famous tunes Roamin’ in the Gloamin’, I Love a Lassie and Keep Right on to the End of the Road.