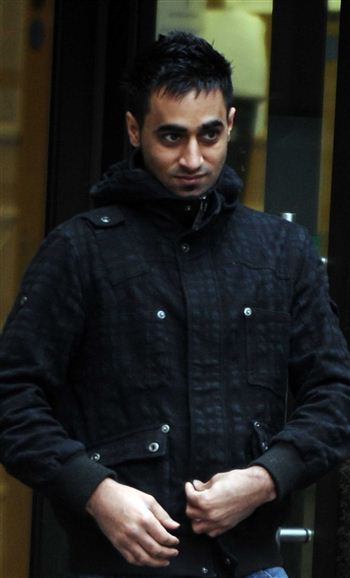 A FRAUDSTER at the centre of a “rogue’s pact” has escaped a jail sentence for shoving an accomplice into a car and demanding money from him.

Kessar Ali, 21, turned on fellow conman Cameron Corsie, claiming he had been duped out of his share of the takings from a cash scam.

The pair agreed to meet to settle their dispute, but the discussion turned nasty as Corsie was bundled into a car.

Ali was originally charged with abduction after Corsie claimed he was assaulted while in the back of the car heading along the M8 to Glasgow.

But today (Friday) in court Ali was fined £2,000 after admitting a reduced charge of assault in the back of a car in Edinburgh’s Fountainbridge.

Sheriff James Scott said it was “with great hesitation” that he was not sending Ali to prison.

The pair had “a criminal association” and Corsie is currently in Saughton Prison serving a sentence for his part in the fraud, Edinburgh Sheriff Court was told.

Fiscal Depute John Kirk said: “It was shortly after 7pm and Corsie was in the street for a meeting, as had been arranged.

“There had been a criminal association between them in the form of a fraud, but there is a dispute as to money obtained from it.

“The car drew up and Ali and another man took hold of Corsie and put him into the back seat of the vehicle.

“A discussion about money took place and Corsie was released from the car.”

Corsie reported the July 2008 attack to police and was ultimately jailed for his part in the cash crime.

Yesterday Ali, who was also convicted of fraud but never jailed, admitted he “went about matters in an entirely inappropriate manner.”

His defence agent Chris Fehily said Ali, of Livingston’s Bankton Terrace, should not be jailed as he was his family’s main provider following his father’s death.

He said: “It is clear this was a rogues’ pact or bargain formed between the individuals.

“Corsie is well known to the court and is remanded in relation to the fraud.

“Mr Ali found himself being duped and went about matters in an entirely inappropriate manner.

“However he is not without his responsibilities, his father having died tragically of a heart attack 18 months ago while in an aircraft.

“Mr Ali has had to fill his shoes and provide for his mother from his income from telephone sales.”

Sheriff James Scott asked: “How much was it; was he duped out of money that had been duped out of someone else?”

Mr Fehily replied: “It is a thread I am unwilling to pull.”

The Sheriff told Ali: “It is not acceptable that people should be pulled off the street and shoved into cars.

“It is with great hesitation that I am not getting reports considering imprisonment.

“The fine is reduced from £2,500 taking account of your early plea.”