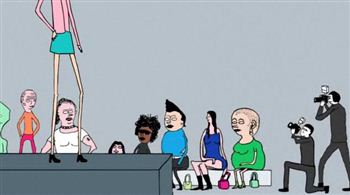 ONE of Scotland’s best-known fashion houses has described its own models as “skeletal” and “horribly skinny” in its new PR video.

Pringle, which has been fronted by Sophie Dahl, Pixie Geldof and Oscar winner Tilda Swinton sparked a row after hiring controversial artist David Shrigley to promote their latest collection.

In an animated film due to be screened today at London Fashion Week, the Glasgow based-artist mocks the models employed by the borders-based firm.

Shrigley – a former newspaper cartoonist who also directed a music video for Blur – slated fashion shows as “boring”, adding that most models live on “fluff and cocaine”.

However critics have said that the film could damage Scotland’s reputation overseas, adding that it is crude and depicts Scotland as backward.

The video has already been shown in Milan and New York, but the former Glasgow School of Art student said it was “difficult to say” what the reaction was at the fashion events.

Shrigley said: “I think people appreciated something light-hearted interjected into the fashion show as such events are usually rather serious and can be a bit boring.

He added that there was a serious message behind the film about thin models and that he had been asked to tone it down by Pringle before its launch.

“The models are horribly skinny aren’t they?

“It can’t be good for them eating fluff and snorting lots of cocaine.

“The only bit they asked me to take out was a part where I said fashion designers were disgusting.

“Maybe fashion designers are too sensitive for such harsh nonsense, but I was only joking.”

However, Tessa Hartmann, who founded the Scottish Fashion Awards five years ago said that the film could damage Scotland’s reputation overseas.

She said: “I’m a huge fan of the Pringle brand, but this animation is crude and despite its attempts to be humorous, falls flat because of its stereotypical depictions of Scots.

“These age-old cultural references are dated and dull.

“If Pringle feel seriously about the issue of thin models why don’t they use large sized models in their show in London next week.

“That would certainly be a more productive and significant way to grab the headlines.”

The comic animated film features a female narrator speaking over surreal images of grannies knitting jumpers, sheep in washing machines and a stick thin model parading in front of a grotesque audience.

The narrator says: “When we have a lot of new jumpers and cardigans we put on a fashion show to show them off.

“The models are all horribly skinny like skeletons – I don’t know why they have to be so thin.

“Personally I would like to see a normal shaped lassie modeling them, with a big bottom and a nice pair of hooters.”

The narrator also suggests a relative of hers would be a better choice, before an eye-wearing alcoholic runs down the catwalk and leaps into the audience.

In another scene the narrator also speaks over the image of a bagpiper playing in pouring rain, saying: “The thing you have to remember about Scotland is that it rains a lot.

“In fact, it rains all the time. It totally does your head in if you are not used to it.”

She said: “I think most woman who watch this cartoon film and then look at Pringle’s real-life promotional photographs will be very confused.

“For as long as I can remember Pringle has used models with skinny, straight-up and down figures and that continues today with Tilda Swinton.

“They are criticising thin models in the video, but still do not appear to be employing any woman with more curvaceous figures.”

A spokeswoman for Pringle said that they were excited about the film, and that she was not aware of any complaints about it.

She said: “We are thrilled to showcase David Shrigley’s fresh approach and to support Scottish visual art and design.”

‘Tartan Tat’ Drives Out Kiltmaker To The Stars