Five arrests as Scottish Defence League driven out by police 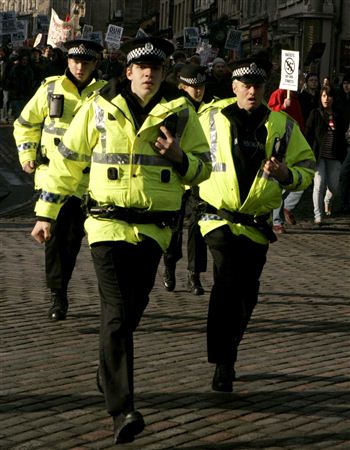 FIVE people were arrested as neo-Nazis came face to face with anti-fascist activists in Edinburgh at the weekend.

A ring of 700 police officers had to close streets to keep the rival demonstrations from clashing, bringing the capital to a standstill.

They penned around 40 Scottish Defence League members into a pub opposite the Scottish Parliament while Scotland United Against Racism and Fascism held an anti-Nazi demo at the top of the Royal Mile.

But a flashpoint saw around 100 people break away from the peaceful protest and running towards the pub, resulting in a four-hour stand-off.

The SDL members were eventually ushered out of the city in two double-decker buses under police escort.

Meanwhile 2,000 people joined the Scotland United rally at the city’s Ross Bandstand was followed by a march to the Meadows.

Assistant Chief Commander Iain Livingstone, of Lothian and Borders Police, said the arrests were made “for public order offences.”

Speaking yesterday after Saturday’s marches, he praised his force for keeping the opposing sides from clashing.

He said: “We are pleased activity in the city centre passed off without major incident, and with only five arrests being made for public order offences.

“At this time I’d like to thank those who participated in the Scotland United rally and march, the majority of whom were well behaved and willing to engage constructively with police.

“I would also like to thank those members of the public who may have experienced some disruption to their day as a result of the activity in the city centre, for their patience and co-operation.

“Finally, I would like to reassure the public that we are experienced in policing events of this nature, and we will continue to ensure that groups who demonstrate in our city treat it with the respect it deserves.”

Scot selling “used” Nazi-themed cleavers with swastikas on side