Experts round on Salmond’s “weight problem” ahead of obesity war 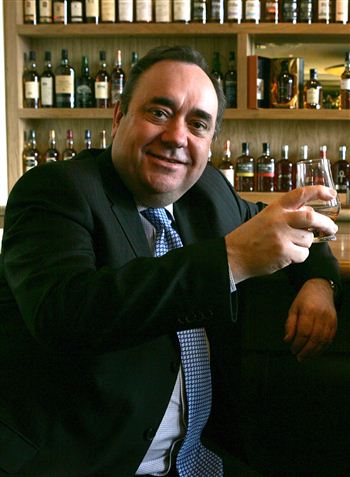 SCOTLAND’S First Minister has been slammed for “letting himself go” by fat-fighting health campaigners.

The National Obesity Forum say curry-loving SNP leader Alex Salmond should “be more responsible” in setting an example as he leads the Scottish Government’s war on bulging waistlines.

They questioned the credibility of the fun-loving First Minister – known for his attention-grabbing stunts – ahead of a new Scottish Government battle on flab.

Since securing power in the Scottish Parliament he has been photographed scoffing pies to promote Scottish produce and posing in a chef’s hat and clutching a curry while judging the Indian chef of the year contest.

The call for political heavyweights to “practice what you preach” comes as an expert report estimated Scotland’s obesity epidemic costs the taxpayer £457 million per year.

Tam Fry, of the National Obesity Forum, said: “Politicians have a responsibility to act as role models.

“It’s very important those who lecture the public on the dangers of obesity practice what they preach.

“I understand Alex Salmond has a busy lifestyle but that’s not an excuse to let yourself go.

“Health secretary Nicola Sturgeon should tell him to be more responsible.”

The drive is backed by an official report claiming Scotland’s obesity bill could balloon to over £3bn a year unless it is addressed.

But Mr Salmond should not be singled out, according to nutrition professor Mike Lean of Glasgow University.

He says the SNP leader’s weight puts him alongside two-thirds of Scots adults who are overweight.

“Salmond has a weight problem”

“It has genetic elements and is very difficult to manage.

“Everyone knows Alex Salmond has a weight problem but that puts him in common with roughly 65 per-cent of all Scots.”

A spokesman for the First Minister said: “Mr Fry is absolutely right about one thing – Mr Salmond is extremely busy in his job, helping to improve life for the people of Scotland.”