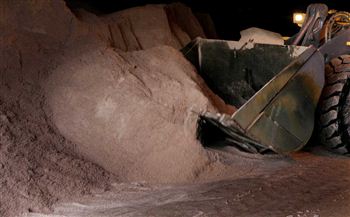 SCOTLAND’S road network could be brought slithering to its knees by heavy snow again this week – because council chiefs have failed to stock up on salt and grit.

Local authorities were heavily criticised early in the New Year after stocks of road salt were allowed to run out.

But despite weather forecasters warning of heavy snow arriving across most parts this week, it has emerged many councils still don’t have enough supplies to cope.

Some revealed last night that they only have enough grit to last a few hours.

The Met Office has said it expects up to three days of snow north of the border later this week, sparking fears that untreated roads will become treacherous to drivers.

Up to 10cm have been forecast on Wednesday night, with snow expected to fall around the country until Friday afternoon.

The AA has said that local authorities should be better prepared after last month’s heavy snow, describing the situation as “desperate”.

Edinburgh City Council revealed they are the least well prepared, having just 1,790 tonnes – enough supplies to grit the roads for just half a day.

However, they later said that they had made a mistake, and were unable to say how long the grit would last.

While West Lothian Council said they have 800 tonnes – enough for a day and a half of light snow on primary routes only.

Scottish Borders Council – which is often hit the hardest – revealed that they have 1000 tonnes of salt, enough for just one day of heavy snow.

And Aberdeenshire Council said that they are only able to grit one third of their total network because of salt restrictions.

Paul Watters, head of road policy at the AA, said that the current grit situation is “diabolical”.

He said: “The supply chain has not had enough grit coming through it to go around.

“To be honest it’s diabolical.

“If there winters are going to come like this at us then we’re going to have to be better prepared, Scotland needs constant re-supply.”

Watters added that councils having just a few hours supply was “dreadful”, saying that they should be better prepared after the heavy snow last month.

He said: “That’s desperate, dreadful. I expect there is a bit of reluctance pay so much for grit.

“But they should be buying for example in the summer, when it is cheaper.

“If we are going to have these irregular winters they’ll have to be better prepared.”

However, councils in the west of the country have said that they are prepared for ice and snow.

Glasgow City Council said that it could last a week at peak use, and could mix salt and grit to make it last longer.

And East Renfrewshire Council said that they have enough grit to last up to 11 days.

While Fife Council said that it had enough to last until Saturday, when 3250 tonnes will be delivered.

Helen Chivers, forecaster at the Met Office, said: “We’re expecting snow to travel north across the country, reaching the border regions in the early hours of Wednesday.

“During the day in Wednesday we may well find it reaching Aberdeen, and you can certainly expect snow in Scotland on Wednesday.

“We’re looking at up to 10cm in higher areas, and 2-5cm throughout.

“It will be frosty tonight and that will have an impact on councils using grit as well.

“We’re looking at up to three days snow this week.”