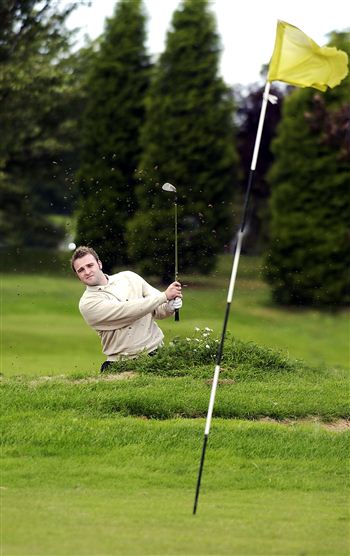 THE home of golf plans a break-a-way group to help promote Fife as a mecca for fans of the sport amid claims VisitScotland isn’t doing enough to promote the area as a major tourist destination.

Fife Council is leading the drive to form a stand-alone ‘alliance’ and has hired a £26,650 team of consultants to draw up a strategy already.

The proposed Fife Golf Alliance would adopt an approved marketing plan for the entire Kingdom which supports hundreds of jobs and brings millions of pounds into the local economy.

The consultants, Business and Tourism Solutions Ltd, have been tasked with carrying out a “robust review” of the industry to see if the independent alliance is needed.

If they decide that it is, they will then be responsible for setting it up and running it for the first year.

Bosses at the council say that setting up the alliance will bring a “hugely positive impact” to the local community.

The idea is supported by local businesses at all levels who think VisitScotland are not doing enough to promote the full spectrum of courses and accommodation available to tourists.

Ken Lawson, owner of the Spindrift Hotel in Anstruther thinks that something needs to be done to promote smaller businesses in the area, especially during the recession.

He said: “I think we need something because it’s lacking at the moment.

“Over the last two or three years VisitScotland in particular has gone more international rather than local and national.

“We need some kind of package.

“This is what I think we are lacking especially in Fife where we have so many wonderful courses.

“Tourists all know about the Old Course, Gleneagles, Carnoustie, all the very expensive places to play golf in Scotland.

“What they don’t know about are the Crail and Ellie kind of courses.

“I have found that lately, especially last year when the US were going through a bad time, that they were still coming to Scotland but they were finding that they could come and play golf for a lot less than they used to.

“We need to develop a lot of different packages at different price ranges like they do abroad so that people have got the choice.

“The bigger courses and hotels are well advertised, but we do not market the middle market places very well at all.

“We have got to get the locals involved as well. I’m talking about people from Fife itself and places like Edinburgh where it’s not far to travel for a day of golf.

“We aren’t doing enough for the number of golf courses we have in Fife. The potential is there but we are not fully committed for what we have got here in Fife.”

Gap in the market

It is hoped that the alliance would eventually be run by major players in the industry.

The Environment Enterprise and Transportation Committee of the local authority approved funding of £30,000 over two years for the project, after being presented with a report on the proposed alliance.

Fife Council state in their report that 700 jobs in St Andrews alone are supported by the golf industry, and a further 500 across the county.

It also states that there is a gap in the market which the Fife Golf Alliance needs to fill.

But the tourism group – one of the national bodies currently promoting golf in the Kingdom – argue that they already do a lot to attract tourists to Fife.

VisitScotland say that they “work closely” with the council to support the industry, and will be working on other specific projects to boost golf tourism in the Kingdom.

Richard Pinn, Regional Director of the tourism body, said: “VisitScotland is committed to promoting the local tourism product in Fife and also promotes the First in Fife golf pass, Fife golf packages and we also run a Golfers Welcome Scheme in the area.

“We have been marketing golfing in Fife both internationally and within the UK during the run up to The Open and in this current climate it is crucial we work together to get tourism growth back on track.”

But Fife Council insists that the Alliance would enhance the economy of the area, and “champion the golf industry in the Kingdom”.

Keith Winter, head of development services, said: “Fife Golf Alliance could potentially be an overarching body to lead the way and champion the golf industry in the Kingdom.

“It could also bring a hugely positive impact to the local economy and tourism sector.”