THE 90 year-old wife of the former Governor of the Bank of Scotland has been given the all clear to continue driving after smashing her car into a cyclist.

Lady Suzanne Risk sent Robert Benn, 40, flying off his bike after she failed to see him at a junction in Edinburgh.

The victim, who had been wearing high-visibility clothing, was taken to hospital and treated for internal bleeding.

Lady Risk appeared at Edinburgh Sheriff Court today (Wednesday) with her 88 year-old husband, Sir Thomas, who retired as the head of BOS in 1991.

Admitting driving without due care or attention, she accepted she was at fault for the crash but set out a 20-minute plea to the court asking to be allowed to carry on driving, despite confessing to her “frailty”.

The court heard that since the October 1 accident last year, she questioned her own fitness to drive so undertook two eye tests and sat two driving tests.

And the pensioner did so well at the tests that she was “knocking at the door” of full membership of the Institute of Advanced Motorists, her lawyer claimed.

Sheriff James Scott was persuaded that Lady Risk was not a risk to the public and fined her £200 and put six penalty points on her licence, which had been unblemished for 70 years. 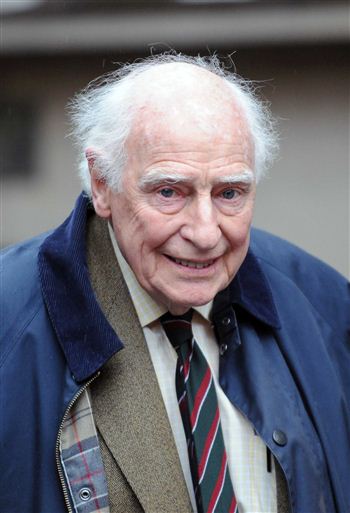 Professing to being “comfortably well-off,” Lady Risk offered to pay compensation to Mr Benn, but the Sheriff refused.

Even after leaving the bank before its £28 billion amalgamation with Halifax, he maintained an interest in the firm.

He was central to a protest against turning the bank’s iconic headquarters on The Mound into a money museum.

Sitting alongside drug addicts, knife-criminals and fraudsters in court, the tweed-wearing couple held hands patiently waiting for the case to call.

With her balance aided by a tartan walking stick, tiny Lady Risk was dwarfed in the dock next to a sturdy Reliance prison guard.

“There was a certain amount of damage”

She had been driving towards her home in Inverleith Place and drove into the cyclist “when it appeared safe,” according to Fiscal Depute Neil Allan.

He said: “This was an accident that happened in fair weather and good road visibility conditions at 2.30pm.

“Lady Risk had driven out of town over the Dean Bridge and waited to turn right.

“When it appeared safe she failed to see Mr Benn cycling towards her, wearing high-visibility clothing.

“There was a collision and a certain amount of damage to the car and bicycle.

“Your Lordship has a decision to make in terms of public safety.”

Since turning 80, Lady Risk and her husband agreed to tell one-another if they thought the other’s driving was becoming dangerous, her defence agent Ewan Easton said.

Mr Easton added: “The cyclist, Mr Benn, suffered some extremely nasty complications as a result, including internal bleeding, so he has had a very tough time of it.

“But Lady Risk was not behaving in a cavalier fashion in any sense and one can only speculate as to why she didn’t see the cyclist.

“As a hugely responsible citizen, her first reaction was to question her own ability to continue driving.

“An eye test proved her eyesight is not deteriorating.

“Her next thought was to have her driving checked by the British School of Motorists and they judged it to be of a high standard.

“And the Institute of Advanced Motorists, who have a fairly sterner test than the BSM, scored her to be of a grade whereby she would be knocking at the door to be considered for full membership as an elite driver.

“Lady Risk is very conscious of her frailty, she is now 90 and has been driving since 1938.

“She is a very competent driver and conscious to keep her skills current.”

Sheriff Scott told her: “You will be fined £200 and your licence endorsed with six penalty points.”

Fiscal Depute Mr Allan added that it was “a matter of regret” the Crown had to convict Lady Risk.

He said: “It is a matter of regret that there is no other way to go about this than to criminalise an entirely responsible lady.”