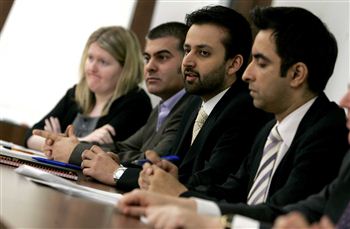 ANTI-fascist groups have warned their own supporters not to mix it with race hate protestors in Lockerbie later this month.

Scotland United – a grouping of politicians, faith leaders and unions – urged anti-facist supporters to stay away from the planned Scottish Defence League march to prevent the thugs gaining publicity from likely clashes.

Around 700 officers had to be drafted in to police a demonstration by the far-right group two weeks ago in Edinburgh, which led to the arrest of five SDL campaigners.

Speaking yesterday in Edinburgh, Scotland United spokesman Aamer Anwar said that any SDL march would be illegal and should be dealt by police alone.

He said: “I’ve been speaking to various organisations who understandably want to demonstrate against these extremists and urging them not to go to Lockerbie.

“We have been given assurance by the police that any march by the SDL held in the town will be illegal.

“If it does go ahead there will be a robust response from the police and we are urging people to leave the police to it.

He added that the SDL’s bid to hold a “vigil” by the monument to those killed in the Lockerbie bombing was “totally inappropriate and a cheap publicity stunt by this Nazi organisation”.

The human rights lawyer was joined by representatives of the Church of Scotland, the Scottish Islamic Foundation and Lockerbie’s parliamentary representatives in condemning the SDL’s actions.

Elaine Murray, Labour MSP for Lockerbie, has lodged a motion with the Scottish Parliament urging the SDL to call off the planned march through the town on 27 March.

She said: “This attempt by the so-called Scottish Defence League to use the tragic murder of 270 people…is a despicable publicity stunt, and an insult to those who lost their lives and to their families and friends.

“The release of Abdelbaset al-Megrahi back to Libya on compassionate grounds was hugely controversial, but the decision was debated in the Scottish Parliament and different opinions were aired there.

“That was the appropriate democratic forum for different views to be expressed.

“We may disagree abut Mr MacAskill’s decision, but we are united in condemnation of the SDL’s attempt to use Lockerbie to lend legitimacy to their hatred.”

She also urged anti-fascist groups, hundreds of which took to the streets on February 20, to stay away from the Lockerbie demonstration.

She said: “It will give the SDL an excuse to use violence and to clash with protestors.

“Any march by the SDL will be illegal and the police will deal with it.

“However strongly you feel about this extreme group do not go onto the streets for this.”

The campaign group has been joined by Dr Jim Swire, whose daughter Flora was killed in the disaster 22 years ago.

In a statement he said: “We can only hope that by the good offices of the Lockerbie community and their police force, this base attempt to trade on this terrible disaster in this way for extremist political ends, will not adversely affect the people of Lockerbie, and believe that if it occurs at all, it will attract nothing but contempt for the base philosophy which lies behind it.”

The SDL have been accused of choosing Lockerbie because of the bombing of Pam Am 103 on 21 December 1988 by Abdelbaset Ali Mohmed Al Megrahi.

Scotland United has said that the far-right group are trying to take their campaign to the Borders town to stir up feelings of hatred towards ethnic minorities.

Osama Saeed, spokesman for the Scottish Islamic Foundation, said that the SDL were “clinging to a confused ideology” and planned the march in an attempt to link Lockerbie with groups like al-Qaeda.

He said: “Lockerbie is pre-9/11 and it was not inspired by al-Qaeda.

“The Scottish Defence League are clinging to some confused ideology that tries to link Lockerbie and group like al-Qaeda and Islam together.

“I think the people of Lockerbie will take the lead on this issue, but I don’t think that they will put up with this.”

Church of Scotland calls for urgent review of benefit sanctions